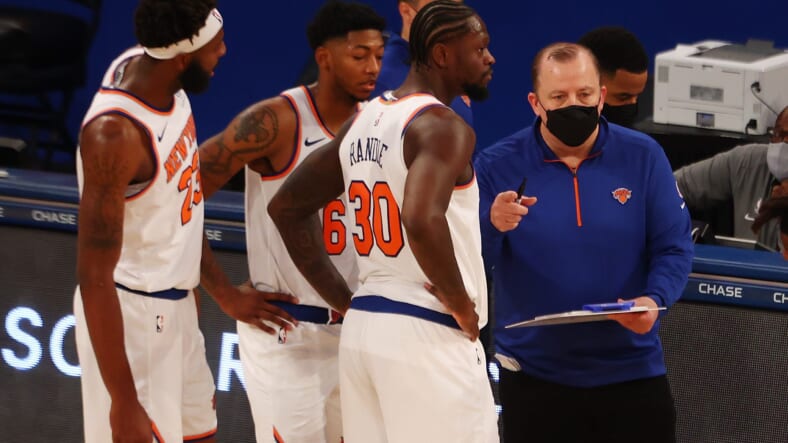 When the New York Knicks opened to the 2021 season, nobody expected them to be a playoff-contending team. In fact, they had undergone a five-game losing streak early on in the season, which had already turned fans into pessimists. However, it wasnâ€™t until the midway point, after the All-Star break where the Knicks found their true sense of self.

Standing behind the league’s best defense, the Tom Thibodeau ran squad has not only been aggressive but tantalizing. They have done it with a few one-year players and reserve options, as the Knicks didnâ€™t make a big splash of the trade deadline when they were rumored to be interested in Lonzo Ball and other star players.

One bonafide elite point guard was on the mind of President Leon Rose, and that was Chris Paul. Paul was traded to the Phoenix Suns, but Rose believed he couldâ€™ve been a catalyst for them and even help them make the postseason and compete with some of the better teams in the league.

Paul is averaging 16 points this year, shooting .487 from the field and logging 8.8 assists per game. He wouldâ€™ve been an incredible addition for New York, but while their pursuit ended in failure, the Knicks walked away with something far more valuable.

â€œWe all have seen what Chris has done throughout his career,â€™â€™ Thibodeau said following Sundayâ€™s practice. â€œWhen you have a player like that, he hasnâ€™t just played great himself, heâ€™s made everyone around him a lot better. Very dynamic point guard, can score the ball. Can pass, unbelievable vision.â€

Yes, Paul brings elite-level talents to any given team, but passing on him mightâ€™ve been the best thing for a franchise starving for life. The Knicks lost Paul but gained themselves. They learned what it meant to play for one another and with a team, buying into a methodology that focused on defense and playing as one and not individually. The Knicks seem to be in rhythm when on the floor, dominating their last nine opponents and cementing themselves in the 4th seed in the Eastern Conference.

As they prepare for a matchup against the Phoenix Suns, Paulâ€™s new squad, on Monday at 7:30 PM, they remember something important, it doesnâ€™t matter what types of talent you have on the floor if you canâ€™t work well with one another. The Suns are currently 42-18 and own sole possession of the 2nd seed in the Western Conference. However, they are on a two-game losing streak, which opens the door for the Knicks, who could take advantage they push ahead.