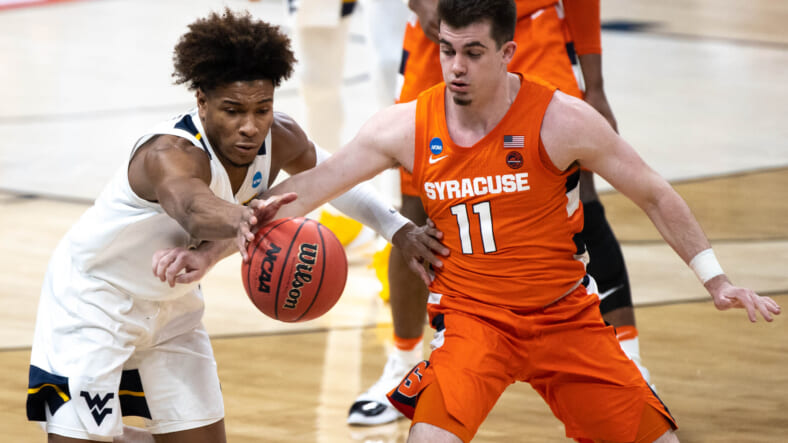 The New York Knicks clearly had a priority during the NBA draft, three-point shooting, and defense. Their selections are refined in both categories, specifically Miles McBride out of West Virginia and Houston stand out, Quentin Grimes.

The front office executed a flurry of trades, showing off their ability to work the system and add capital for the future. The team simply didnâ€™t have the luxury of hosting four rookies next season, but with several players set to be utilized as trade pieces, the Knicks will likely have open roster spots for the taking.

In addition to several trade assets, the Knicks have upwards of six players hitting the free-agent market, so replacing them in some fashion was a necessity.

2.) Traded 21st pick to Clippers for 25th pick and future 2nd round

Quentin Grimes this past season:

-Faced off against good competition in Europe, showed signs of promise

-Biggest hands of any guard in draft class

-Shot above 41% from range last season

Taking a look at the biggest stand out traits:

McBride isnâ€™t just a fantastic perimeter defender, he also shot 41% from three last season. He averages 15.9 points, 4.8 assists, and connected on 43% of his shots from the field. He is a high effort player who fits Thibodeau’s system perfectly. Allowing him to develop behind a veteran, potentially someone like Derrick Rose, will give him the confidence and time to adapt efficiently.

Grimes, on the other hand, is a perfect 3-and-D player for the Knicks, who could be outpaced in the Reggie Bullock sweepstakes. Grimes averaged 17.8 points, 5.7 rebounds, and shot 40% front range last season. Featuring on one of the best defensive teams in college basketball, you can see the trend beginning to form here with Thibodeau’s strategy.

They clearly prioritized defense with offensive upside, depending on their coaching staff to extract value over time. Grimes has Alec Berks vibes on offense but offers far more on defense than the veteran contributed last season.

Aside from the two American-born players, the Knicks also landed Lithuanian native Rokas Jokubaitis. As a combo guard who featured in the Euro League last season, he has experience against better competition, which should allow him to translate nicely to the NBA.

One of his biggest selling points is defense, with the ability to play on and off-ball. With solid ballhandling and diversity in the back-court, his versatility should contribute toward playing time. Most didn’t anticipate the Knicks going this route, but they are looking for guards with potential, and both McBride and Jokubaitis offer just that.