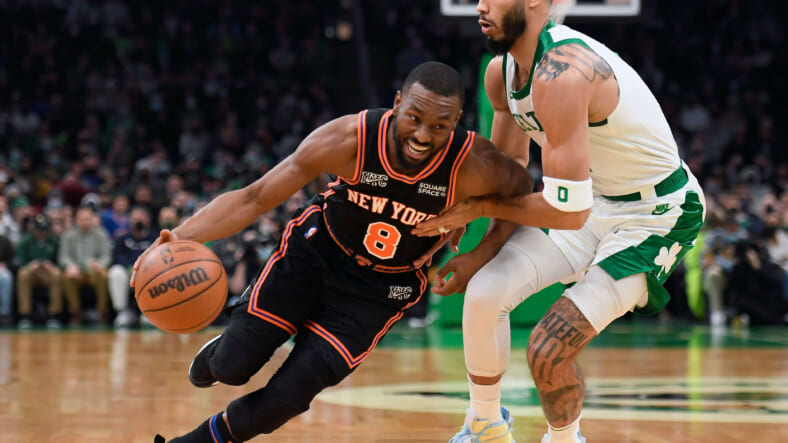 When the New York Knicks initially signed veteran point guard Kemba Walker to a two-year contract, fans and analysts alike gushed about the addition. The supposed injection of elite scoring potential projected to be a major catalyst for the Knicks’ success heading into the season, but Walker’s lackluster defense and spotty shooting forced head coach Tom Thibodeau to make a change in late November.

Walker, who was well received by New York fans, has been benched since his last performance against the Phoenix Suns on November 26. In that contest, Walker posted 17 points over 23 minutes.

Walker’s return to the spotlight against Boston was the last resort, though, representing a cry of desperation for Thibodeau, who lost six players this past week to Covid health protocols. The team entered Saturday night against the Boston Celtics, Kemba’s former team, without Kevin Knox, Quentin Grimes, RJ Barrett, Immanuel Quickley, and Miles McBride.

McBride woke up on Saturday expecting an opportunity of a lifetime to string together a third impressive performance after dominating in his first two major assignments with the Knicks. Nonetheless, it was Walker that ended up taking the spotlight, posting 29 points on 45.5% shooting from three-point range, six rebounds, and three assists.

Despite the Knicks dropping five of their previous six games, Walker’s performance offered a Â glimmer of hope into his value, even after being exiled.

He added: “I don’t know what the future holds, you know? I do feel like I have a lot to give still. I don’t know. That’s up to these guys.”

The future is undoubtedly murky for the former All-Star, who represents a professional scorer that simply disappears on defense, leaving his team vulnerable. After all, that was the primary reason Thibodeau elected to bench him in the first place. When Kemba was on the court, the Knicks ranked dead last in defensive efficiency per 100 possessions.

“I know I should be playing, so no question. It feels great,” he said. “But whatever situation I’m in, I’m gonna stay locked in, stay prepared. Whatever the team needs from me, I’ll be there for them.”

With multiple players still on the Covid list, Walker has a solid opportunity to justify his worth for the remainder of the season. Reports have indicated that teams aren’t interested in acquiring him via trade, so the Knicks may have no choice but to either dump his salary or continue to utilize him in specific scenarios.

Ideally, his only value doesn’t come as a last resort due to Covid overload.