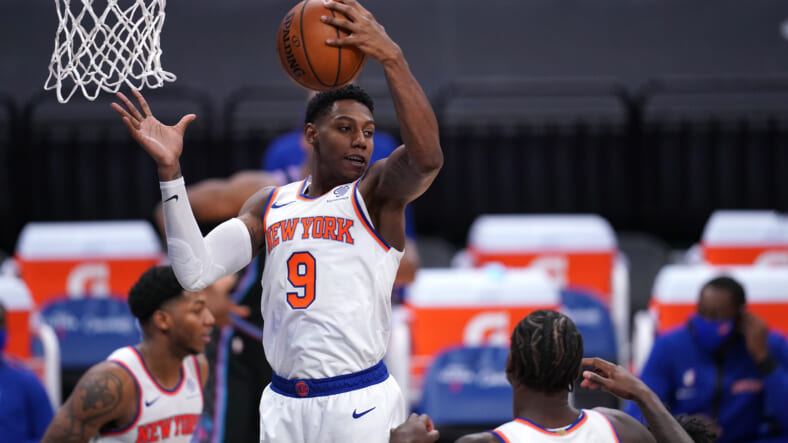 If the New York Knicks really want to acquire a star player, they are going to have to give up some premium assets. The Knicks have been linked to Washington star Bradley Beal, who is a bonafide superstar and would immediately make the Knicks a better team.

While Beal has only reached the All-Star game twice, heâ€™s averaged over 30 points per game the past two seasons and is just 27 years old. Over 25 games this year, Beal is averaging 32.9 points, 4.6 assists, and 5.2 rebounds, arguably his best season to date.

Michael Kay stated several days ago that the Knicks were quietly trying to lure Bradley Beal out of Washington:

â€œIâ€™ve got it from a very good source that the Knicks are quietly interested in a Bradley Beal. Howâ€™s that gonna happen? Heâ€™s signed to a long-term deal. He has not said he wanted to be traded. But you forget, the Knicks have World Wide Wes on their side. Heâ€™s been in the ears of some of Bealâ€™s people and kinda nudging them that this might be the time to push for a trade,â€ Kay said on hisÂ ESPN radio showÂ last week.

The issue, Washington would likely demand a massive deal, including multiple first-round picks, some of which would be unprotected. In addition, they might even ask for RJ Barrett, a player the Knicks might feel too highly about to part ways with.

Bobby Marks of ESPN told Alder Almo of ESM that the Knicks would have to be willing to give up RJ Barrett in the deal.

Ultimately, acquiring a player like Bradley would be costly, but pairing him with Julius Randle, Immanuel Â Quickley, Mitchell Robinson, and more would be a playoff-caliber move. In addition, they have plenty of current players on rookie deals, meaning they would still have more salary space to acquire another big name this upcoming off-season.

Alternatively, RJ Barrett is just 20 years old and averaging 16.5 points per game this season over 33.7 minutes. Heâ€™s taking a slight step forward but has shown a bit more maturity in his game, and considering Beal was averaging very similar numbers at the same age back in 2013, there is hope that Barrett could develop into an elite player, but it might be five years down the line.

The real question is, do the Knicks favor making the playoffs now or later, and do they value Randle enough to inject more talent into the starting squad alongside him, or they feel as though their youth is capable of picking up the load when he eventually moves on?