Should the Knicks consider trading Mitchell Robinson at the deadline? 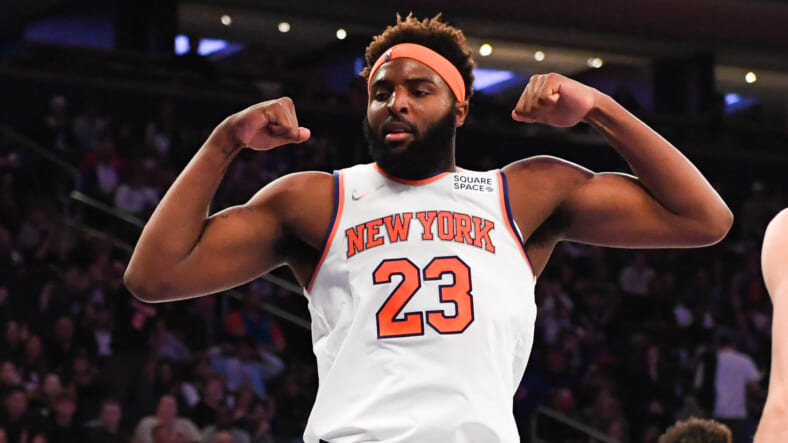 With the New York Knicks dipping below .500 on the season, management could be looking to make big changes ahead, specifically at the trade deadline as they potentially target a star player to pair with Julius Randle.

However, the team still needs to correct several issues within their own ranks, one of them being the inconsistent play of Mitchell Robinson this season. Robinson, who is preparing to turn 24 in a few months, is averaging 6.9 points, 7.7 rebounds, and 1.7 blocks per game.

Robinson is averaging his lowest points total in his career through 20 games this season and has seen a considerable regression compared to his sophomore campaign back in 2020. During that season, Robinson averaged 9.7 points, 7.0 rebounds, and 2.0 blocks per game.

The biggest negative that Robinson presents is poor health, dealing with a myriad of injuries this season, including ankle, hip flexor, and primary lower-body issues.

While most fans love Mitch and what he brings to the table, including physicality and blocking proficiency, heâ€™s essentially a nonexistent scorer that relies on put-back dunks as his catalyst on offense.

Seeing some of the more sufficient scoring centers in the league should indicate that a change might be necessary for the future. The Knicks have been tantalized by players like Myles Turner, Nikola Vucevic, and Nikola Jokic in recent days, showcasing what scoring big men can provide for a team.

It is clear that Robinson isnâ€™t contributing a ton toward the team’s defensive efficiency, given the Knicks currently rank 23rd in defensive rating at 109.8. In addition, theyâ€™ve dropped to 17th in total rebounds per game but host the third-best interior defense in basketball.

Nonetheless, teams have tortured them from the perimeter, driving into the paint and kicking the ball out to the corners for easy shots. While Robinson isnâ€™t responsible for this, the communication with his teammates has been poor.

The question is, should tom Thibodeau and the front office consider Robinson a trade piece of the deadline? Given heâ€™s in the final year of his rookie contract, earning 1.8 million this season.

The only way this makes sense is if the Knicks pursue a scoring big man with solid defensive attributes. Of course, acquiring a player like Myles Turner would be a luxury, but it would also cost them young talent they may not be willing to part with.

However, based on Robinson’s growth and consistency issues, the Knicks may be better off utilizing him as a trade piece instead of banking on him as a long-term solution given stamina struggles and inefficient scoring.

Alternatively, Robinson gives the team much-needed physicality inside and still has plenty of untapped potential to exploit. Robinson has seen an increase in field goals made unassisted this season, hitting 42.9% compared to his 37.4% last year. An increase in muscle mass has hurt his stamina and effort at times, but that theoretically should improve as the season progresses.