Should the Knicks be looking to deal Kevin Knox before start of 2021-22 season? 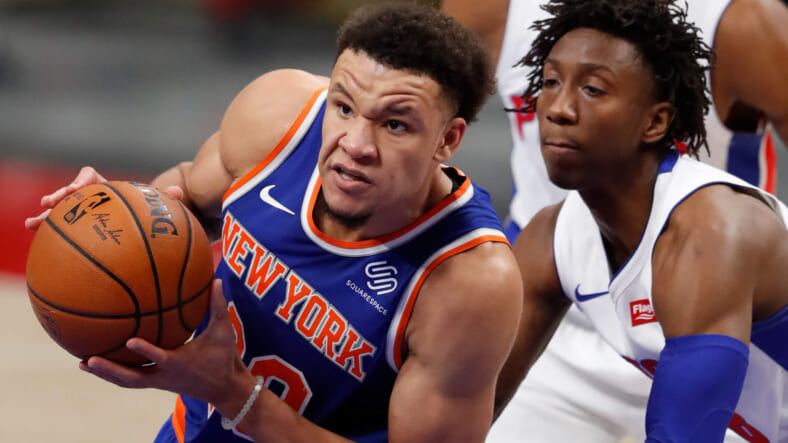 The story of Kevin Knox continues as the New York Knicks try to find a sufficient way to utilize his talent. Knox, who is disappointed since being drafted ninth overall in 2018, could be a trade candidate, and some believe heâ€™s better off taking his talents elsewhere in return for draft capital.

Knox, who is only 22-years-old, has averaged just 8.5 points on 36.9% shooting during his career. His low rebound totals at 3.2 and 70% free-throw success rate only pile on to a career littered with deficiencies and slow development.

This upcoming season, Knox will be in the final year of his rookie contract before the team has to make a decision on his qualifying offer. The front office could present him with a $7.9 million qualifying offer for the 2022-23 season, but they would be incredibly silly to do so. In fact, heâ€™s preparing to earn $5.8 million this upcoming year, which far overvalues his production.

Knox has continuously seen his production dwindle ever since being drafted. Last year, he averaged just 11 minutes per game, making 42 appearances. During Knoxâ€™s limited time on the floor, he posted 3.9 points, 1.5 rebounds, and shot 39% from the field. Despite having deficiencies in multiple positions, the Knicks simply didnâ€™t value his efforts enough to get him involved as a reserve.

After drafting Quentin Grimes and Miles McBride, it is extremely likely that Knox ends up either being traded or left off the active team. Now, it is fair to offer him one compliment, and that is in regard to his work ethic and energy on the bench. Knox was expected to appear during Summer League games but unfortunately was forced to miss the session due to COVID-19 protocols.

The addition of Evan Fournier and the retention of Alec Burks make Knox’s value close to zero. It will be extremely hard for him to crack the roster, let alone earn a spot on the bench this upcoming year. There is still hope he can blossom into a solid role player in the future, but another team will have to give him an opportunity as his opportunities in New York are quickly winding to an end.

I fully expect the front office to gauge trade options for him before the regular season commences, but it is entirely possible he rides the rest of his rookie contract out with the Knicks, which would be a waste of salary space.

What do you think the Knicks should do with Kevin Knox? Comment below!