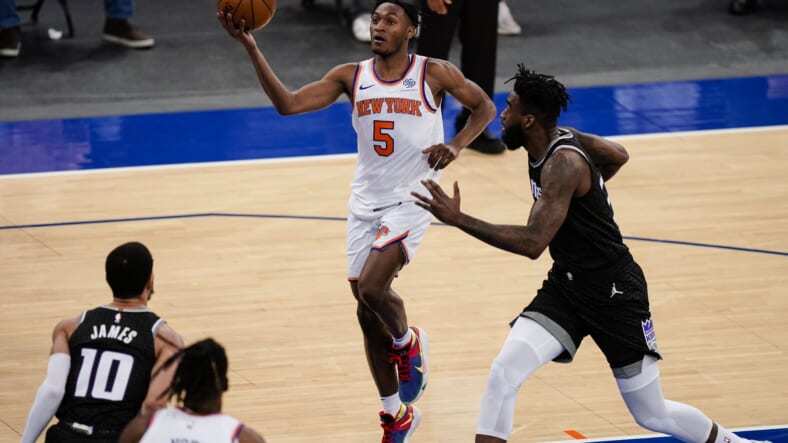 The New York Knicks took on the Detroit Pistons on Saturday evening, completely dominating them in a stellar victory. In the first quarter, the Knicks scored 41 points, with Julius Randle scoring 20, more than the entire Detroit team managed, settling with just 15 points. The Knicks ultimately won 125â€“81, as Detroit struggled to get anything going, falling to 14-35.

In the contest, the Knicks went deep into their depth pieces to give them some playing time as they ran the score up, and one player who featured was new big-man Norvel Pelle, who was on the floor for just three minutes. During the short time on the court, Pelle blocked two shots and recorded three rebounds, suffering a nasty broken finger injury in the process.

I have never seen someone so delighted to see their finger turn into a zigzag pic.twitter.com/3OYtPYW53P

Just two minutes into his appearance Pelle slammed his hand against the rim as he was hacked by a defender, creating a fracture that sent his finger bending in a different direction. Shortly after, he showed off his toughness and proceeded to make consecutive blocks on the following defensive positions.

Had to coach Tom Thibodeau was blown away at his aggression and toughness.

â€œPretty remarkable because the guy hadnâ€™t gone through any practices. He was ready to go,â€ Thibodeau said. â€œIt looked ugly but you appreciated that he wanted to stay in and thatâ€™s why we brought him in â€” the rim protection. And so it said a lot about him. Obviously pleased with the way he played in that short stint there.â€

With center Mitchell Robinson expected to miss a lengthy amount of time due to a fractured right foot, Pelle will undoubtedly be earning more minutes in the near future. Unless his finger is severely damaged and requires time off, we should expect to see him playing more minutes on the floor. Recently, New York has rolled with Taj Gibson and Nerlens Noel as their primary big men, and theyâ€™ve gotten the job done despite offering minimal offensive production.