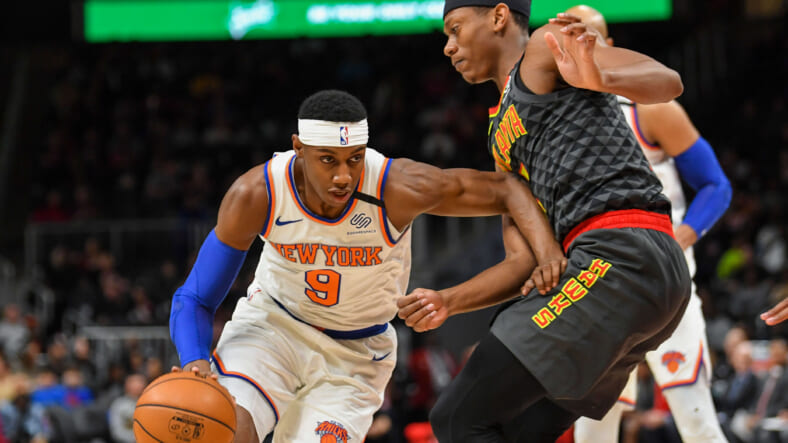 The New York Knicks have taken a different shape this season under head coach Tom Thibodeau, playing incredible defense and showing a bit more offensive efficiency than in previous seasons. Players like Julius Randle are having career years under this new system, as the veteran power forward is averaging 23.2 points, 11.1 rebounds, and 5.5 assists, all career highs.

Acquiring a star player to pair with Randle might be in the Knicksâ€™ best interest, and with the March 25 trade deadline coming up, we could see a move in the near future. However, Thibodeau was keen on moving some of the younger pieces for established veterans, per a report from the New York Post.

[Thibodeau] pleaded for [GM Leon] Rose to offer long-term deals to free agents such as Gordon Hayward,Â Marcus MorrisÂ andÂ Bogdan Bogdanovic. He wanted to trade forÂ Derrick Rose, a longtime favorite of his. He thought RJ Barrett and Mitchell Robinson could potentially be flipped for seasoned veterans. Initially, he was hardly sold onÂ Julius Randle, according to a colleague.

So far this season, RJ Barrett is averaging 16.5 points, six rebounds, and 2.9 assists per game. His field-goal percentage has jumped a significant amount from .402 in his rookie season to .443 this campaign.

The New York Knicks have something in RJ, and it’s not a trade piece:

At just 20 years old, heâ€™s showing that he can be a force on offense but needs to improve his defense and become a bit more aggressive. I view Barrett as a long-term solution for this team and not a trade piece, given his youth and the step he took this season under Thibodeau. With solid teammates around him, they should continue giving him action.

Eventually, the Knicks will add a premium player to their starting five, and Barrett will likely benefit from his presence. Randle has assisted in Barrettâ€™s growth exponentially, and with New York becoming a more desirable destination for star players, I believe it will only benefit the youngster.

As for Mitchell Robinson, he has just one more season left on his contract before he will require an extension. Robinson is currently out with a fractured hand, and while heâ€™s not an offensive force, heâ€™s one of the best shot-blockers in the NBA.

Considering how much the Knicks have gotten out of Nerlens Noel, I believe Robinson is the more expendable of the two, but I believe both have long-term futures on the Knicks and have shown enough to be retained.