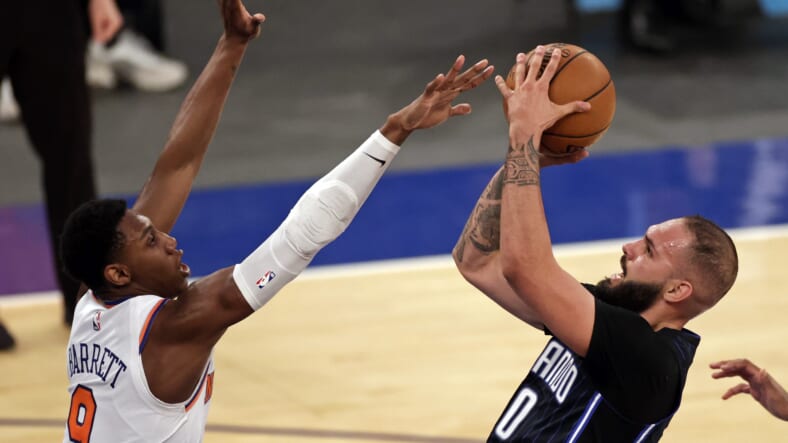 According to Adrian Wojnarowski of ESPN, the Knicks have come to an agreement with guard/forward Evan Fournier on a four-year deal worth as much as $78 million.

Free agent Evan Fournier has agreed to a four-year deal that could be worth as much as $78M with the New York Knicks, source tells ESPN.

Fournier offers an improvement over Reggie Bullock, who signed a three-year deal with the Dallas Mavericks shortly after free agency commenced. Last season, the small/shooting guard averaged 17.1 points, 3.4 assists, and shot nearly 46% from the field. He posted a career-high 41.3% from range, averaging 6.7 attempts per game.

Compared to Bullock, Fournier is able to create shots for himself and is a better ball handler. Bullock was more of a catch-and-shoot specialist, and while Fournier can serve that purpose, heâ€™s able to command attention that will take pressure off Julius Randle.

The French-born player has a team option in the fourth year of the deal, which would average out to $19.5 million per season. Reports had previously indicated that Fournier was in search of a four-year, $80 million deal, and it seems as if the Knicks are offering him just that.

Having retained Nerlens Noel and Alec Burks on three-year contracts, paying out $32 million and $30 million apiece, the Knicks are still in the race to bring back Derrick Rose on an extension. This would prove their loyalty, retaining some of their own players while going out and grabbing a replacement for Bullock, who serves an even bigger purpose. The former first-round selection has nine years of NBA experience and is a far more productive scorer.