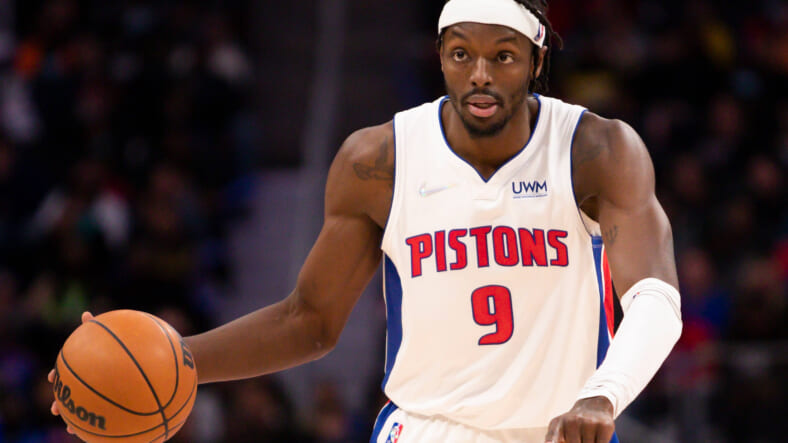 The New York Knicks have their fair share of struggles to iron out, but they have an opportunity to increase their talent level at the trade deadline coming up in a month.

Whether they sell the farm for a superstar or bring in a player who can pair with Julius Randle and take some of the pressure off is yet to be seen. However, rumors floating suggest the Knicks will be active in the coming weeks.

According to Shams Charania of The Athletic, the Knicks are one potential suitor for Detroit forward Jerami Grant and Indian’s Myles Turner:

Several playoff teams are pursuing Pistons star forward Jerami Grant: The Wizards, Knicks, Blazers and Lakers among others, sources said. Grant is sidelined due to a UCL injury in his right thumb but Detroit will have a vast group of suitors for the 27-year-old. Grant, who is eligible for a four-year extension worth up to $112 million this offseason, is one of the most sought-after players this trade season.

Grant is an intriguing player at 27 years old. The 6’8″, 210-pound forward is averaging 20.1 points, 2.6 assists, 4.8 rebounds, and is shooting 41.4% from the field and 33% from deep this season. As Grant has increased his three-point attempts, his hit rate has decreased significantly from 39% in 2019 to just 33% this year. However, he still has plenty of untapped potential and injecting him into a Knicks team that has talent and is capable of making the postseason extract his premier qualities.

Considering Detroit is rebuilding, the Knicks may be able to acquire Grant for a younger piece and draft capital. Grant is currently on a three-year, $60 million contract with one year left on his deal in 2022–23.

Regarding Turner, Shams also believes the Knicks will be involved:

Rival teams are ramping up conversations with the Pacers involving guard Caris LeVert and center Myles Turner. The Mavericks and Knicks are expressing interest in trading for Turner, sources said.

Turner would be a great fit for the Knicks as they lack a true scoring five. Turner is averaging 13.1 points, 7.3 rebounds, and 2.9 blocks per game. He’s also a career 35% shooter from deep and is converting 52% from the field this year. Altogether, Turner is unhappy with his complementary role in Indiana, and the Knicks could offer him a potential star position in a prospective deal.

Turner is realistically a perfect deadline target for Thibs, who would be getting solid defense from him and elite scoring traits from a big man.