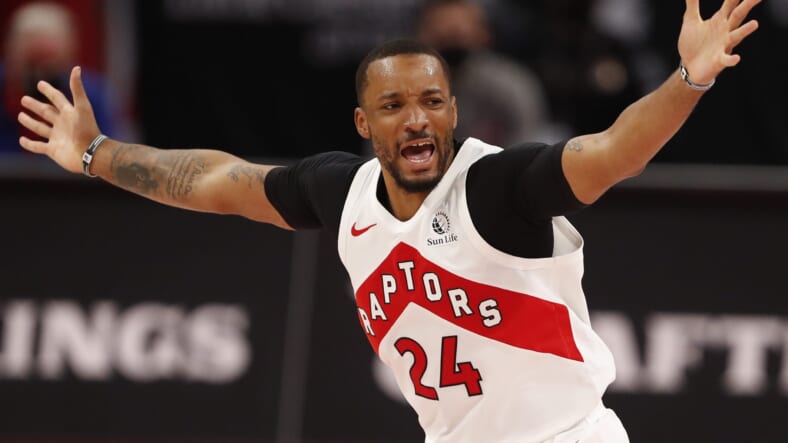 With the NBA trade deadline expiring on Thursday, the New York Knicks are still in the mix for several players. The big names include Lonzo Ball and Andre Drummond, but one under the radar player has bubbled to the surface in connection with New York.

Norman Powell, who currently features on the Toronto Raptors, has seen his name connected to the Knicks.

Add Raptors shooting guard Norman Powell to the list of persons of interest for the Knicks before Thursdayâ€™s trade deadline.

Berman also spoke to an NBA Scout, detailing why Norman would be a Tom Thibadeau dream fit:

â€œYouâ€™re going to have to pay him next year,â€ the executive said. â€œHeâ€™s really improved his shooting and [is] good in the half-court. Not a playmaker, but heâ€™s a good defender and great person.â€

The Knicks would be getting a GREAT player for Thibodeau:

Powell is an incredibly underrated talent, averaging 19.6 points per game over 30.4 minutes played. Heâ€™s featured in 42 games this season and has experienced a nice developmental jump in his sixth year in the NBA. Last year, he averaged 16 points, but his shooting has improved, as heâ€™s connecting on .498 of shots from the field and .439 from beyond the arc. Considering heâ€™s attempting 6.4 3-pointers per game, .439 is an excellent success rate.

Add in that Powell is a solid defender and heâ€™s a perfect fit for Thibodeau, representing a player who brings offensive efficiency as a shooter but also plays defense at a high-level. As a primary shooting guard, it would be interesting to see how the Knicks insert him into their lineup, as he likely wouldnâ€™t interfere with their chemistry too much. A player like Drummond, for example, might pose a significant chemistry problem, as the Knicks are comfortable with Nerlens Noel and Mitchell Robinson at the moment.

The problem with Norman is that the Raptors consider him highly and are expected to offer him big money next free agency. If New York is going to trade for him, they need assurance that he will sign an extension immediately.