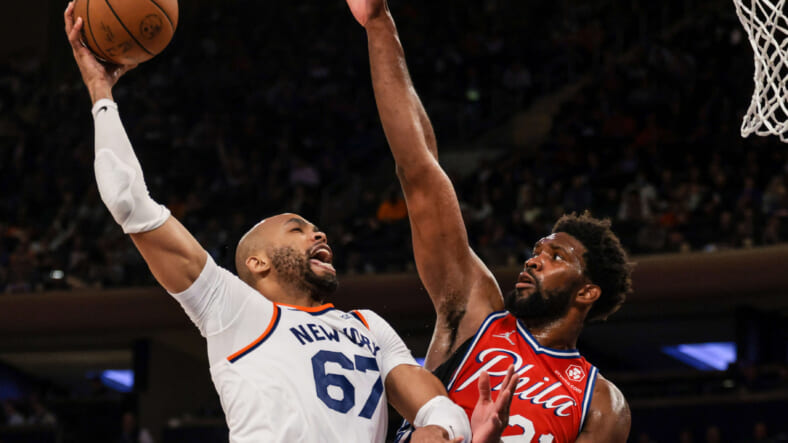 The New York Knicks are preparing to take on the Philadelphia 76ers one night after losing a disappointing game to the Cleveland Cavaliers at home.

Cleveland shot over 54% from three-point range on Sunday evening, and against the top-ranked three-point team in the Philadelphia 76ers, the Knicks once again have another big challenge on their hands.

However, Philadelphia is expected to rest star center Joel Embiid on Monday evening, coming off a six-game winning streak and four game home winning streak. Embiid scored 30 points in the team’s latest victory over the Chicago Bulls, averaging 21.4 points, 4.0 assists, 9.4 rebounds, and shooting a career-high 39.4% from deep this season.

This is a significant development for New York, given the 76ers rely heavily on Embiid to provide offensive and defensive production. However, the Knicks have dropped several disappointing games this season, so a Philadelphia team without their best player is still one to take seriously.

Behind Embiid, the Knicks have to be wary of Tobias Harris, who is averaging 19.8 points per game, and shooting guard Seth Curry, averaging 17.1.

New York has dropped three of their last four games, including three losses at home this season. At 6-4, getting back in the win column would be big before taking on Milwaukee once again on Wednesday evening and Charlotte on Friday.