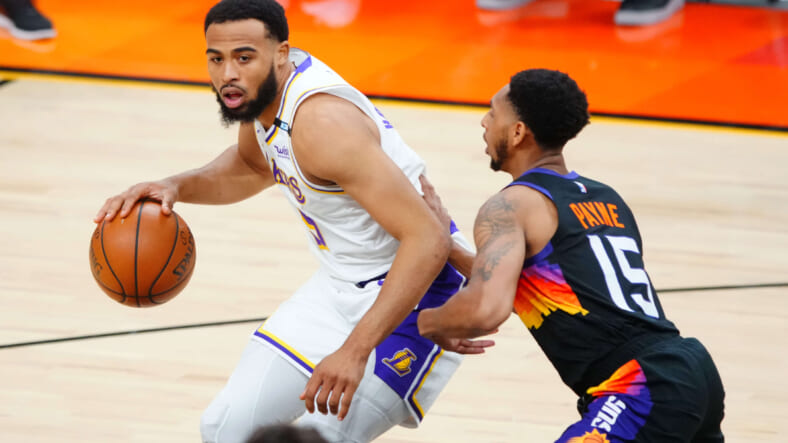 Having added multiple guards in the 2021 NBA draft, the New York Knicks are trying to establish a base of potential starters for the upcoming season. Landing Quentin Grimes out of Houston provides a solid 3-and-D player who can make an impact immediately, but guaranteeing him a starting spot might be overzealous.

With $50+ million in free agency to spend, the Knicks will be active this August, signing new players and adding talent to a roster that is preparing to lose several impact players.

The team is targeting shooting guards and point guards, being connected to three different players who could contribute.

â€œThe Knicks are mentioned by league sources as a team that has expressed interest in [Evan] Fournier, while New York has also been linked to Lakers guardsÂ Dennis SchroderÂ andÂ Talen Horton-Tucker,â€Â according toÂ Jake Fischer of Bleacher Report.

Taking a look at the three targets listed for the Knicks:

Evan Fournier is coming off a season where he featured on the Orlando Magic and Boston Celtics. Heâ€™s able to play small forward and shooting guard, similar to Reggie Bullock, in case the Knicks lose him to free agency. The Los Angeles Lakers reportedly have an interest in Bullock’s services. Fournier, alternatively, averaged 17.1 points, 3.4 assists, and shot 46% from the field this past season. From three, he connected on 41% of his shots over 6.7 attempts, a solid clip that would provide plenty of value to a Knicks team that is focusing on three-point shooting.

His versatility to play multiple spots at guard and forward is a major positive, but depending on the former first-round picks asking price, it could be more affordable to retain Bullock instead. Fournier is coming off a five-year, $85 million deal, earning $17 million per season. He could earn a similar amount over the next few years, which is a major pay increase compared to what Bullock was earning last season.

One point guard, the Knicks, could be interested in is Dennis Schroder. The German could find his way back to the Lakers, but his asking price is quite high. Apparently, he is seeking a $100 million contract in free agency, based on his production, that number is quite lofty. He averaged 15.4 points, 5.8 assists and shot 43% from the field last year. His lackluster 33% from range doesnâ€™t exactly scream efficiency and scoring production, and having elite players like Anthony Davis and LeBron James can mask deficiencies. In addition, the team just traded for Russell Westbrook, so Schroder is as good as gone.

If Iâ€™m the Knicks’ front office, Iâ€™m staying away from Schroder and his ridiculous asking price, as there are better options on the market.

Another player who has been connected is Talen Horton-Tucker, who is preparing to turn 21 years old entering his third season of the NBA. Playing in 65 games last year, he averaged 9.0 points, 2.8 assists, and shot 46% from the field. As a primary shooting guard, he is solid driving to the basket and plays good defense, which is exactly what Tom Thibodeau is was looking for.

Horton-Tucker is a restricted free agent, so the Lakers have the final say in extending him a qualifying offer or letting an alternative club present an offer sheet. Unless the Knicks are willing to provide a sufficient deal, the Lakers can easily extend him on his qualifying offer. In that scenario, he would earn $1.8 million, a price point the Knicks can overcome. With the right coaching and scenario, Horton-Tucker could see his perimeter shooting improve, which is his primary weakness entering year three in the NBA.