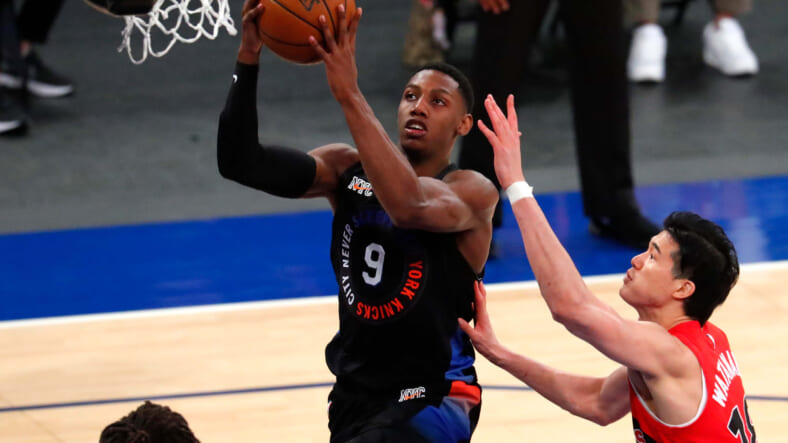 After RJ Barrett’s rookie season, the New York Knicks knew they had something potentially special. Averaging 14.3 points per game over 55 starts, Barrett proved he could stand his ground at just 19-years-old in the NBA. However, it wasnâ€™t until his sophomore season that he really demonstrated he could be a quality shooter, which was an essential piece of the puzzle he was missing during his rookie campaign.

In his first year, Barrett shot just 40% from the field and 32% from three-point range, but bashing him off his first year at the professional level is ludicrous. He saw a 4% increase in field-goal efficiency and an 8% increase in three-point efficiency, landing at 40% last season and above 42% from the corner. Barrett saw an increase of about 7% regarding his overall points coming from three-point shots made. His ability to create shots for himself opens up the floor for his teammates, which was a massive reason Julius Randle managed to have an All-Star caliber season.

Ian Begley of SNY spoke to a professional scout, who was first skeptical that Barrett could reach his potential and was surprised by how much his shooting developed.

â€œIf we were talking a year ago, I would have said, â€˜Iâ€™m not sure about his shot.â€™ I donâ€™t think I was alone there. But he surprised me. I think he surprised everyone. Can he repeat that this season? I think teams will pay more attention to him on the perimeter. But maybeÂ Kemba (Walker)Â andÂ (Evan) FournierÂ help create more open looks for (Barrett and his teammates)? Either way, it will be interesting to see if he can maintain (his shooting from last season).â€

Teams will have to allocate attention toward the corner where Barrett thrived last season from beyond the arc. However, the acquisitions of Evan Fournier and Kemba Walker should contribute toward spreading the floor and allowing him more opportunities to take clean looks at the basket. This past season, he saw an increase in three-point shots made assisted, indicating teammates were passing to him more as a spot-up shooter instead of creating opportunities for himself.

â€œIf he can shoot this year somewhere near where he was last year, it would change (the Knicksâ€™) long-term trajectory, I think,â€ the scout said.

Barrett having another solid shooting season, if not improving, would be a massive development for a team that is depending on him to become a leader. With three years left on Barrettâ€™s contract, the Knicks still have plenty of time to continue helping him reach his potential at a low cost.