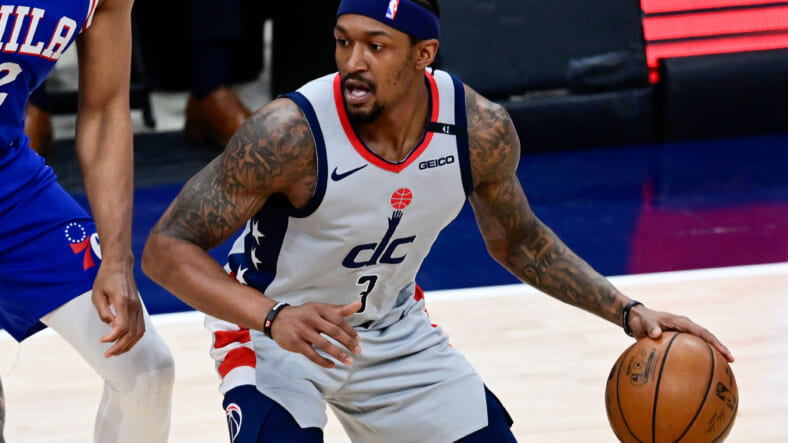 A recent report indicated that the New York Knicks could save the majority of their salary space for the 2022 off-season when players like Zach LaVine and Bradley Beal will become available. However, there is no guarantee those players will hit the market, as contract extensions and potential trades are always on the table.

On Saturday, it was reported that Washington Wizards star Bradley Beal could force his way out via trade, opening up the door for the New York Knicks as a potential suitor.

According to Jake Fischer of Bleacher Report, Washington’s Bradley Beal could force a trade, opening up a potential landing spot in New York :

“He knows he has to make a decision before the draft,” one source with direct knowledge of Beal’s thinking told Bleacher Report. For the past year, people familiar with Beal’s dedicated relationship to the Wizards have consistently rebuffed the notion he had interest in playing elsewhere. Yet a second source close to Beal, when contacted by B/R, confirmed the situation is now fluid.

Beal signed a two-year, $71.7 million extension and will earn $34.5 million next season with a player option during the 2022-23 season. His contract includes a 15% trade kicker.

What would Beal bring to the Knicks?

Last season in Washington, Beal averaged 31.3 points per game, a career-high. He also tallied 4.4 assists, 4.7 rebounds, and shot 48% from the field. He also connected on 35% of his shots from range, averaging 6.2 attempts per game. As a high-profile shooter and elite shooting guard, having earned three All-Star appearances over the past four seasons, he would be a perfect fit in New York to elevate the guard position and offer them a reliable option moving forward. Pairing him with Julius Randle would give the team a perfect one-two punch, taking some of the pressure off the star power forward.

Not only is Beal an elite offensive player, but heâ€™s also an adequate defensive option, averaging 1.2 steals per game. Additionally, he has been extremely healthy over the course of his career, playing a low of 55 games during the 2015-16 season, indicating a clean bill of health.

Thereâ€™s no question the Knicks would have to unload a healthy number of assets to acquire Beal, but he might demand less than Damian Lillard based on his contract alone.