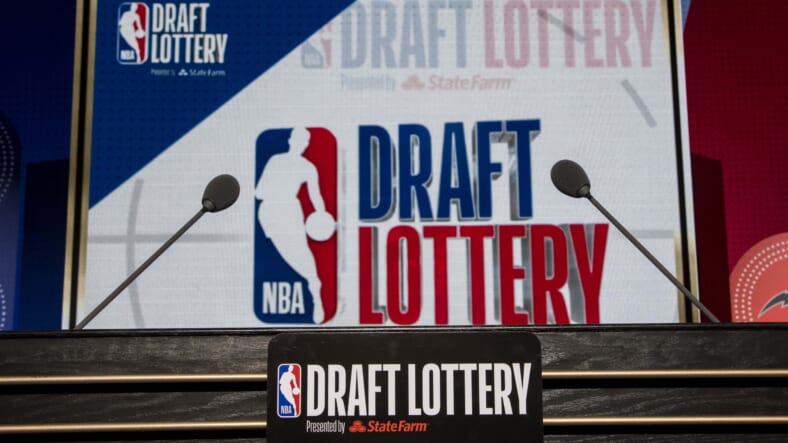 May 15, 2018; Chicago, IL, USA; The podium with logos is seen prior to the 2018 NBA Draft Lottery at the Palmer House Hilton. Mandatory Credit: Patrick Gorski-USA TODAY Sports

The New York Knicks General Manager Scott Perry is inching closer to retaining his position and taking a few more swings at the 2020 NBA Draft on behalf of the New York Knicks. One intriguing prospect to keep an eye on toward the latter part of the draftâ€™s first round is Precious Achiuwa. The Memphis Tiger who recently declared for the 2020 NBA Draft averaged 15.8-points, 10.8-rebounds, 1.9-blocks, and 1.1-steals per game during his lone season in Memphis under Head Coach Anfernee Hardaway. Memphis Tigers season ended with a 21-10 overall and 10-8 record finishing 5th in the ACC. The raw project Achiuwa could become a gem for the New York Knicks with their 27th pick in the late first round.

The 6’9″ 225lbs. forward who possesses a massive 7’2″ wingspan is a big wing/combo forward with elite-level athletic ability. He’s got a strong frame with great length and explosive leaping ability. Precious Achiuwa possesses awesome coordination and body control. The Nigerian native can play the forward position, however, his best NBA position is projected to be as a big wing and he’s already showing that skill set.

The New York Knicks’ needs are all over the place at the moment. A late first-round draft pick like Achiuwa won’t do much for the Knicks right now, however, it may be a huge addition 2-3 years from now if player development is prioritized to a certain extent and Achiuwa is a candidate for Defensive Player of The Year during the 2022-23 NBA season. Yes, the defense is his calling card and the young Bronx native knows it and relishes it.

Mock drafts have Achiuwa being drafted early in the first round while others have him slipping into the late first round and potentially early second round. Anything can happen on draft night, however, if the Knicks land Precious Achiuwa with the 27th overall pick, this would be considered a steal due to his defensive upside and respectable offensive ceiling.