One big silver lining in Knicks’ shootout loss to Nets 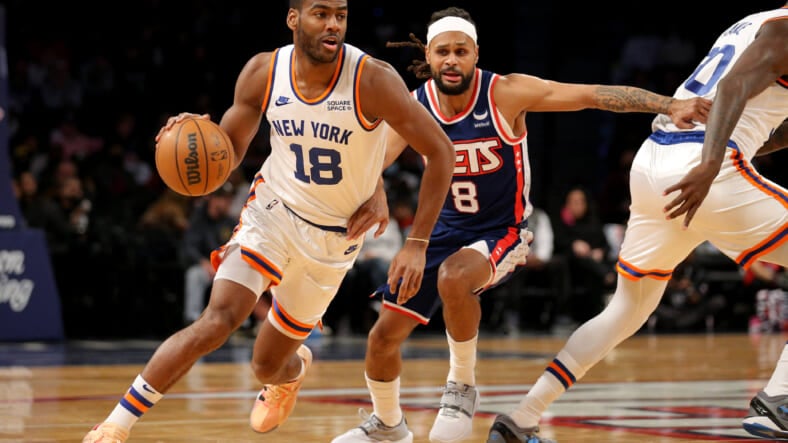 The New York Knicks fell to the Brooklyn Nets on Tuesday evening by a score of 110-112. Despite the defeat, the Knicks showcased stellar offensive capabilities, falling to a team that ranks 2nd in three-point percentage and is one of the NBAâ€™s powerhouse squads.

However, head coach Tom Thibodeau and star forward Julius Randle blamed the officiating on the loss after the game. Randle specifically made a hostile remark toward the referees, indicating they donâ€™t understand the game of basketball.

There were a few suspect decisions made by the referees throughout the contest, especially as James Harden racked up opportunities at the free-throw line, earning 10 shots. Kevin Durant also tallied nine of his own, while the only Knick to reach three was Alec Burks.

Speaking of Burks, he was one of the big silver linings in the loss, scoring 25 points, five assists, and five rebounds. He shot 9-of-21 from the field and 4-of-10 (40%) from three-point range, displaying efficient shooting as the team’s starting point guard.

With Thibodeau dropping Kemba Walker from the starting team, Burks has earned the right to feature as the team’s primary PG. This is his second consecutive game with over 20 points, as he posted 23 against the Atlanta Hawks in his first game after the switch.

It is clear that Alec presents a far more dynamic scorer this season, but his defense is also a big reason Thibodeau has entrusted him with the starting gig.

Nonetheless, the Knicks will turn around on Thursday against the Chicago Bulls, who have won two of their last three games and are coming off a 133 point performance against the Charlotte Hornets. The Knicks recently dropped a game to the Bulls, and with DeMar DeRozan and Nikola Vucevic playing stellar ball as of late, it will be difficult to take them down.

However, the shift in starting unit could give the Knicks a surprising boost, but they must perform better in the defensive category moving forward. Stopping James Harden and Kevin Durant is virtually impossible, and they did the majority of the damage against New York in the defeat, but better officiating may contribute toward a fair contest at MSG.