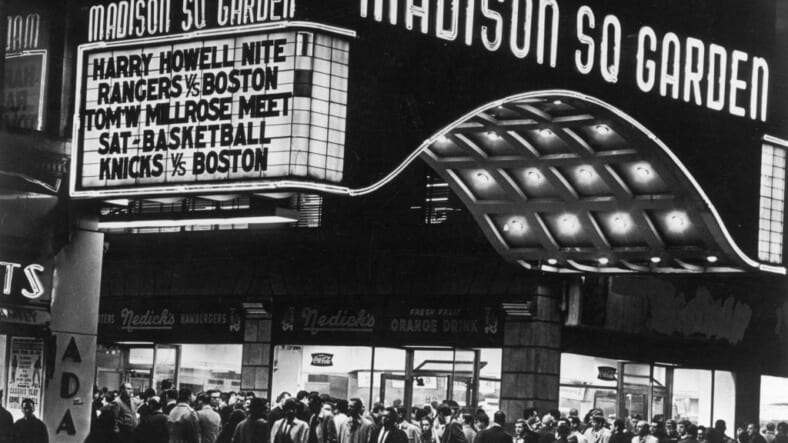 Exterior view of the crowded sidewalk in front of the entrance to Madison Square Garden, New York, New York, January 1967. Located between 49th and 50th Streets at the intersection of 8th Avenue, the marquee advertises a New York Rangers vs Boston Bruins game as ‘Harry Howell Nite’ and the annual Millrose Games (or ‘Meet’), while a poster at the lower left advertises a closed cicuit tv presentation of the forthcoming (February 6) boxing match between the then-Cassius Clay and Ernie Terrell. (Photo by Bruce Bennett Studios via Getty Images Studios/Getty Images)

Lineup to Include Top Games from the Knicksâ€™ â€˜12-â€˜13 Playoff Season, the Rangers and Devilsâ€™ Respective

Each night this week, MSG Networks will be featuring the best games from the Knicks 2012-â€™13 season, which resulted in an Atlantic Division title and a first-round playoff series win versus Boston, as well top games from the Rangers run to the Stanley Cup Finals in 2014. The Knicks and Rangers re-airs will each be 60-minutes versions of the game.

Hereâ€™s a look at the complete schedule this week on both MSG and MSG+. The programming throughout the week will also be available on MSG GO, MSG Networksâ€™ live streaming and video on demand platform for smartphones, tablets and computers.

Knicks improve to 6-0 with terrific roadÂ win vs. the â€˜13 Western Conference Champions

JR Smith hits a buzzer beater asÂ the Knicks prevail on the road vs. the Bobcats

Carmelo Anthony scores 45 points to lead the Knicks in a classic battle vs. the Nets

The Rangers record a road shootout win vs. their Eastern Conference rivals

Led by Mitchell Robinson and Julius Randle, the Knicks kick off the New Year with a win

Carmelo Anthony explodes for 42 points, including 9 three-pointers in Knicks win

The Rangers rally back as RyanÂ McDonagh scores the overtime winner vs. Arizona

JR Smith hits a buzzer beater asÂ the Knicks prevail on the road vs. the Bobcats

Patrik Elias scores a goal in his 1,000 career NHL game

Barzal leads the Islanders to their 7th straight win

Devils tie the game with :48 left and then win in a shootout

Cole Bardreau with his 1st NHL goal, leads the Isles to their 10th straight win