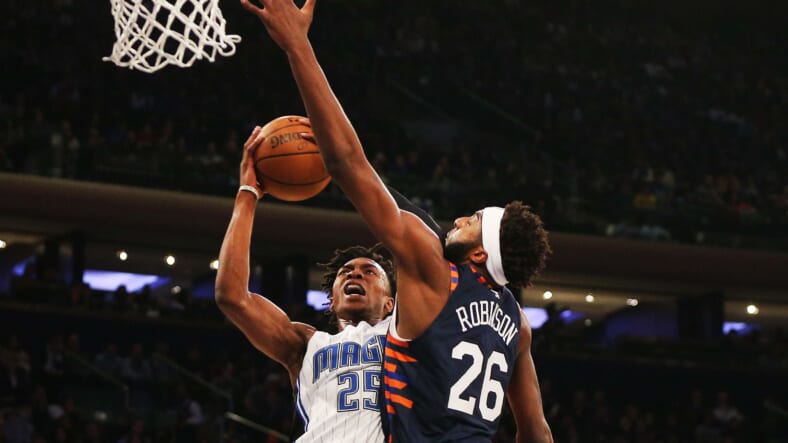 The New York Knicks have another player that is looking to challenge Mitchell Robinson.

Last season, De’Andre Jordan was traded to the Knicks in the Kristaps Porzingis deal.Â  Jordan became a vital piece for the development of Robinson. The veteran, who is known for his dunking, rebounding and blocking, helped improve Robinson in such areas.

Now, Jordan is a member of the Knicks cross-town rival, the Brooklyn Nets.Â  However, the Knicks have found their replacement to mentor Robinson in Taj Gibson.

Gibson is coming to the Knicks expecting to ‘challenge’ Robinson into becoming even better.Â  Talking to the New York Post, he added, “it’s tough to get a shot over him.Â  He’s a crazy shot-blocker.”

Gibson is not really known for his shot-blocking ability, as compared to Jordan.Â  But, he does know how to grind on defense, keep his man in front of him and get rebounds.Â  Gibson can also be able to work with Robinson on controlling his fouls, which is Robinson’s biggest problem.Â  He is also a .709 free throw shooter, not bad for a big man.

He may not be as big as Jordan, but he brings just as much veteran value and experience to the table for the betterment of Robinson.

Gibson has yet to play a game for the Knicks but will be taking Robinson under his wing.Â  He will have a full season with Robinson as compared to Jordan, who only had a few months.Â  The sky continues to be the limit for the young integral piece and his potential seems to be always rising.