New York Knicks: Where does Damyean Dotson fit into the Knicks’ plans? 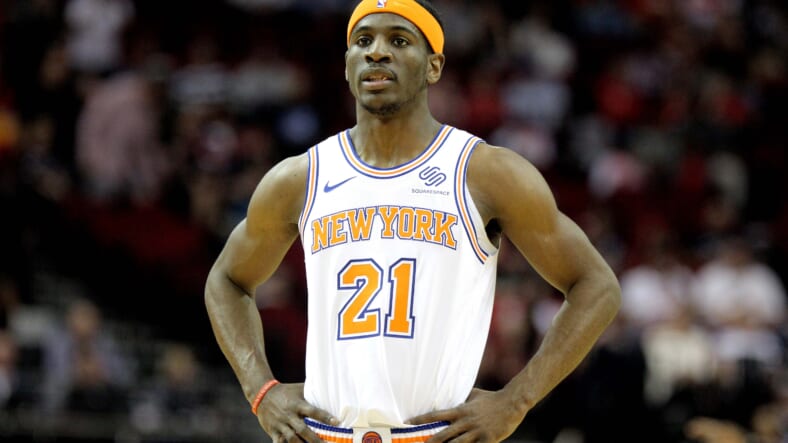 The New York Knicks have a lot of guards fighting for playing time this season, finding out how to utilize them all will be tricky.

One of the guards that played a big role once Kristaps Porzingis was traded was Damyean Dotson. â€˜Dotâ€™ was geared up to have an even bigger role for this upcoming season. The second-round pick from the 2017 NBA Draft signed a three-year contract that was non-guaranteed for the 2019-20 campaign. The date came and went for the Knicks to let him go and save cap-space, as they elected to keep him around for at least one more season.

However, with the acquisition of RJ Barrett, Reggie Bullock, and Elfrid Payton, Dotson’s playing time could take a hit.

How did Damyean Dotson perform for the New York Knicks in 2019?

Last season, Dotson averaged 27.5 minutes per game. But, after the Porzingis trade, his production increased. He averaged 10.7 points and 3.6 rebounds in 40 starts.

The Knicks were relativity bad on the defensive front. They did not have a lockdown defender in their arsenal. Some may consider Frank Ntilikina and some take Dotson. The 25-year-old was a very good defender for the Knicks, stretching the floor and knocking down some timely 3’s when called upon. He shot 37% from beyond the arc.

Dotson will have to fight for minutes like heâ€™s done ever since he came into the league. He does have the defensive ability to require more playing time over other guards, but his offensive production needs to improve if he wishes to steal playing time away from the other options.

As long as he gets more quality time like he got last season while being lockdown defender that can pop 3â€™s in transition, heâ€™ll earn the playing time he deserves.