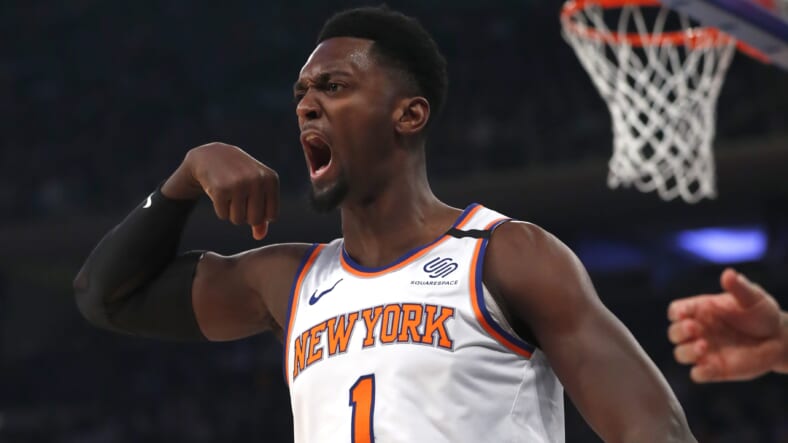 The New York Knicks are in the midst of evaluating their young talent. Sometimes young talent in the G-League can be overlooked. Could that be the case for Lamar Peters? How could anyone know his capability if the Westchester guard hasn’t been explored to the fullest extent with the main New York Knicks lineup.

Just looking at the roster where theyâ€™re at â€” I love Elfrid, Frank and Dennis Smith Jr. â€” but all of them have something in common in that theyâ€™re not consistent 3-point shooters coming off the pick-and-roll, and if you have a super talent like Mitchell â€” and I think Mitchell can end up being one of the best centers over the next 10 years â€” you have to have a guy coming off that pick and if you have to fight over that pick-and-roll. â€¦ If you do that, all of a sudden Mitchell Robinson looks totally different. And his production goes up big time.â€

Currently, Lamar Peters is averaging 17.7- points per game along with 7.2- assists. Peters is also shooting a scorching hot .404 from three-point land. The talented guard from New Orleans, Louisiana is shooting lights out and opponents dear not to leave him wide open coming off the pick-and-roll. Fizdale stating Mitchell Robinson’s potential as a more dangerous threat alongside a sharp-shooting point-guard makes plenty of sense. Why not see if Lamar Peters fits the bill before drafting another 19-year old flawed rookie point-guard in need of development? Peters is more than deserving of a chance to connect with Mitchell Robinson under the bright lights of MSG. It’s definitely a no-brainer and hopefully Allan Houston, Leon Rose, and Scott Perry don’t turn a blind eye to Peter’s success in Westchester.