New York Knicks: Should we be pleased with the development of RJ Barrett? 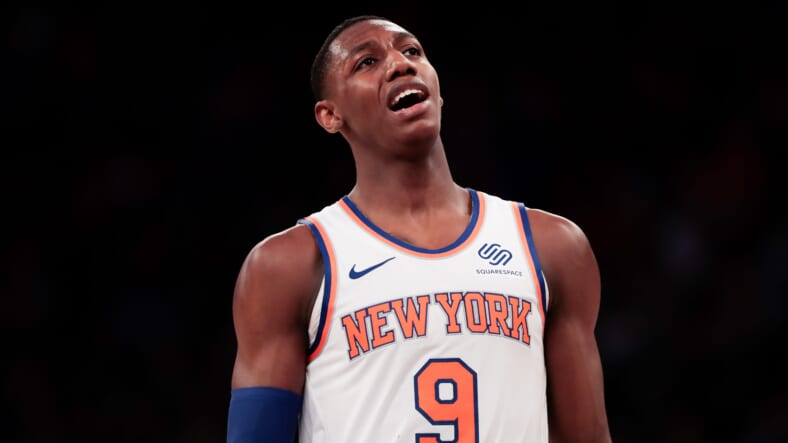 As we inch closer and closer to the halfway point of the regular season, we’ve now seen the top three picks of the 2019 draft in action (after Zion Williamson‘s debut last night). For the New York Knicks‘ RJ Barrett, the third overall pick, how do we assess his development to date?

The NBA season is a marathon as opposed to a sprint, and rookies are particularly made aware of this through their first season in the league. There’s still plenty of basketball left to be played, but the general consensus is that the 2019 draft class has left much to be desired through the month of January.

With the exception of Ja Morant (the consensus leader for Rookie of the Year), injuries and underwhelming performances have soured the view on this rookie class (see Zion Williamson and Darius Garland respectively). But does the same go for the New York Knicks’ lottery draft selection?

RJ Barrett was taken third overall in last June’s draft, and though currently battling a sprained right ankle, has largely been reliable in suiting up for New York.

How has Barrett stacked up against the competition? And in the eyes of Knicks fans, should they be pleased with his future outlook?

Sizing up the competition

Given that this season’s Rookie of the Year race is looking like a runaway win for Ja Morant, the second overall pick is the easy comparison in assessing Barrett’s development. In 41 games played, RJ Barrett is averaging 14.1 points per game, shooting 39 percent from the field, and 60 percent from the free-throw line. He’s also grabbing around five rebounds per game. (ProBasketballReference)

Morant, through 38 games, is averaging 17.5 points per game, shooting 48.7 percent from the field and 80 percent from the stripe. He’s also dishing seven assists per game, leading the Memphis Grizzlies (currently) to the eighth seed in the West. On stats and the eye test alone, Morant clearly has the leg up and looks further along the timeline of making an impact on the franchise.

Friendly reminder that Morant is on the Memphis Grizzlies (who have Jaren Jackson Jr. among others to thank for their surprise surge) and Barrett suits up for the Knicks (who have plenty of work ahead of them getting back to respectability). So while the comparisons between the two may be warranted, it’s also wise to keep the long-term view in mind.

RJ Barrett, with a roster filled with a multitude of veterans signed in the offseason, was not going to be the savior as soon as he stepped through the door. Barring Zion’s debut last night, Barrett is still third amongst rookies in scoring this season. He’s top five in rebounds and top ten in assists amongst rookies.

But the most concerning has to be his percentage from the stripe, that simply has to improve. For a player like RJ Barrett, whose athleticism and length should give him an advantage in getting to the basket, he needs to make defenses pay from the free-throw line. It’s a skill that all players (should) work on, and Barrett is no different.

RJ Barrett might not be breaking onto the scene a la Ja Morant, but he’s by no means a disappointment or “bust.”

The Knicks have plenty of work ahead of them, and Barrett ending the season on a strong note heading into year two will be a key goal to watch in the latter half of the season.