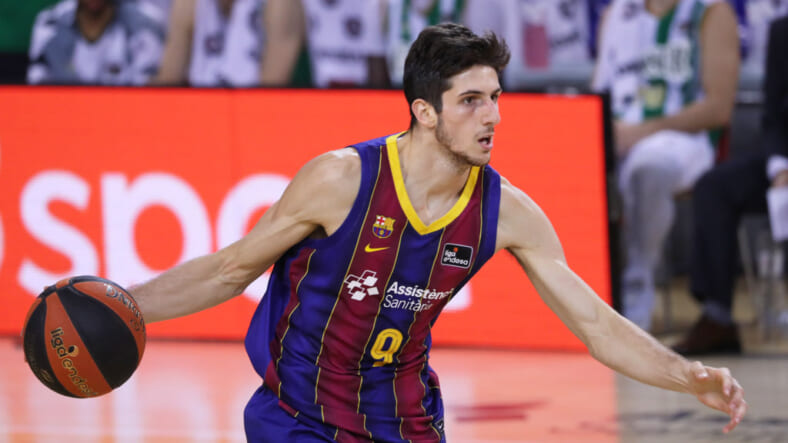 Leandro Bolmaro during the match between FC Barcelona and Real Betis Baloncesto, corresponding to the week 11 of the Liga Endesa, played at the Palau Blaugrana, on 14th November 2020, in Barcelona, Spain. (Photo by Joan Valls/Urbanandsport/NurPhoto via Getty Images)

After selecting Obi Toppin with the 8th overall pick, a power forward with a big frame, and offensive scoring abilities, the New York Knicks elected to go a different direction with the 23rd overall selection.

To review, Toppin is an explosive player around the rim who can draw in rebounds and finish with tenacity. His dunking ability is as good as any, and is an incredible transition scorer, something the Knicks are attempting to improve on moving forward. With a stagnant offense at times, the Knicks and new general manager Leon Rose are looking to improve their offense — Toppin offers just that.

The primary issue with Obi is his defense or lack thereof. He’s a bit old at 22 for a rookie, but there’s plenty of rook for development, and he’s eager to be in New York and attack the challenge.

Who did the New York Knicks land at 23?

The Knicks landed Leandro Bolmaro with the 23rd overall pick, a shooting guard Argentina. At 6-foot-7, 182 pounds, he’s a lanky guard who has room to grow.

Here’s a look at his strengths and weaknesses, via ESPN:

Strengths
-Â Good size at 6-foot-7 for someone who can play point guard.
-Â Creative ball handler who plays at different speeds and shows excellent passing ability off a live dribble. Manipulates defenses with pace, skill and feel. Uses floaters and touch shots to finish creatively around the basket.
-Â Plays with energy defensively. Attentive and aware both on and off the ball. Quick feet sliding and containing in small spaces. Gets into passing lanes.

Improvement areas
-Â Lacks a degree of strength and explosiveness athletically. Can’t always beat better defenders from a standstill. Has struggled to put the ball in the basket at times against higher-level competition.
-Â Career 30% 3-point shooter on more than 300 attempts and a 68% free throw shooter. Just how good of a shooter can he become? Low, clunky release limits him at times against better defenders.
-Â Hasn’t been seen nearly as much as other international players in this draft. Played only 388 minutes this season, rotating between Barcelona’s first and second teams.

UPDATE: The Knicks immediately traded Bolmaro to the Minnesota Timberwolves, for the 25th and 33rd overall picks in return, and interesting turn of events.Â