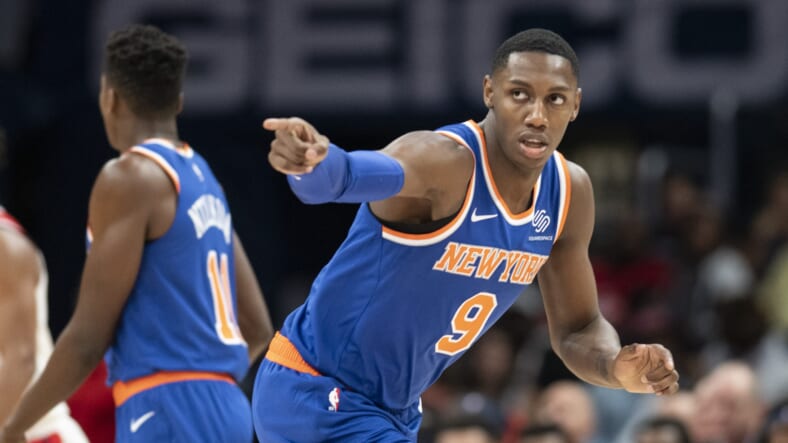 As the New York Knicks finished preseason basketball one thing stood out clearly. It’s how well RJ Barrett played for long stretches and how physically imposing he is for a 19-year-old rookie. RJ Barrett scored 19-points on 9-12 shooting along with 6-rebounds, 3-assists, one three-pointer, and a block in 36 minutes against the New Orleans Pelicans. RJ Barrett looks legit.

Plenty of scouting reports were either wrong about Barrett’s potential weaknesses or Barrett has improved upon the alleged weaknesses all summer in preparation for his first season as a Knick. His ability to see the floor and find teammates looked phenomenal this preseason. Barrett had a reputation of getting tunnel vision at Duke, however, he showed excellent passing skills and awareness on the offensive end. Defensively, Barrett seemed to be at the right spots as well.

RJ Barrett doesn’t look like he’s a rookie at all and that’s pretty scary. The upside he possesses at 19 years old along with his physique allowing him to play long stretches without being handled with “kid gloves” is tremendous. Fizdale stated how difficult it is to take the Maple Mamba off the court due to his ability to do different things on both sides of the ball to help the team potentially win.

The third overall pick in the 2019 NBA Draft has proven he’s no laughing stock and he possesses a “takeover” mentality which is needed, especially when playing for the storied franchise, the New York Knicks. Barrett is now a crucial part of the Knicks’ future. This past preseason may not even have displayed Barrett’s best play due to the fact newly acquired Knick players are still getting acclimated with each other. Therefore, don’t be surprised if Barrett improves even more throughout the regular season as he continues getting comfortable with his teammates and coaching staff.