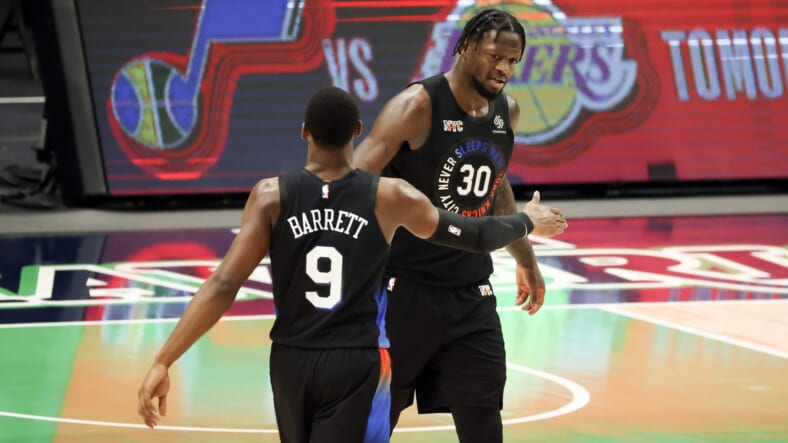 The New York Knicks front office did exceptional work this off-season, bolstering multiple positions and providing head coach Tom Thibodeau with more player combinations to work with during the 2021-22 season.

While rumors circled this off-season regarding potential trades for players like Damian Lillard, the Knicks elected to retain some of their own free agents and sign others to replace Reggie Bullock and Elfred Payton. The team also drafted several contributors with upside, including Quentin Grimes and Miles McBride.

However, the Knicks are never left out of the rumor mill, as Stefan Bondy of New York Daily News presented the idea of trading Julius Randle and RJ Barrett for Karl-Anthony Towns.

Anthony Towns is going into his seventh year in the NBA, averaging 24.8 points during the 2020-21 season, including 10.6 rebounds, 4.5 assists, and shot nearly 49% from the field. He also connected on about 39% of his shots from range, averaging 6.3 attempts per game. Despite missing out on the All-Star game, having only played 50 contests last season, Towns is a bonafide superstar.

Despite his statistical woes and production, trading Randle and Barrett is simply far too much for a Knicks team that is expecting both players to take another step forward this season. Randle, who had his best campaign to date last year, averaged 24.1 points, 10.2 rebounds, 6.0 assists, and shot 45.6% from the field. He also connected on 41% of his three-point attempts, averaging 5.5 shots per game.

Comparing Randle and Towns’s numbers, they are quite similar, so throwing Barrett into the mix pushes the comparisons over the edge. RJ Barrett is just entering a stage where his numbers could see All-Star level production, posting 17.6 points, 5.8 rebounds, and shooting 44% from the field last year. He also connected on 40% of his three-point shots, showcasing the ability to create for himself but also act as a spot-up shooter.

In addition, Towns recently signed a five-year, $158 million deal in 2019, earning over $30 million per season. The Knicks managed to retain Randle at less than $30 million per year, and Barrett is only set to earn $8.6 million this upcoming season.

Based on the statistical and monetary value of all three players, we can confidently say, sticking with Randle and Barrett is an easy decision, especially since we havenâ€™t seen the best of RJ yet.

What do you think of this proposed trade? Would you consider trading Randle and Barrett for Towns? Comment below!