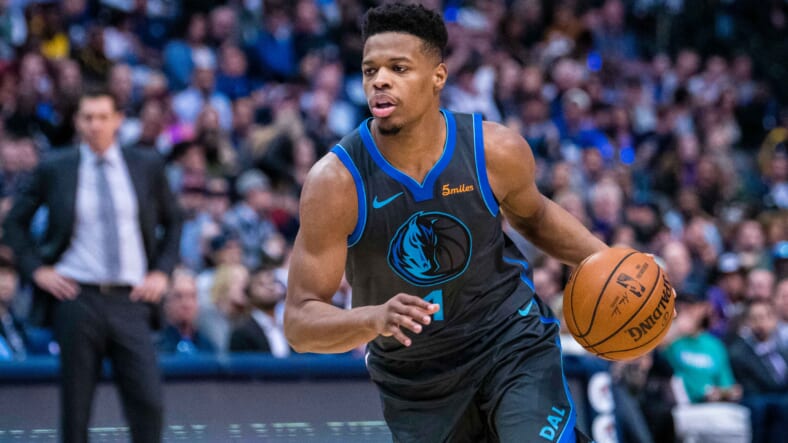 The New York Knicks stay hot as the worst team in the NBA, with a league-high 12th straight loss. This latest loss came at the hands of their division rival, the Boston Celtics, at home by a score of 113-99.

This was an interesting game, in an otherwise tough-to-watch 2019 Knicks season, because the Madison Square Garden crowd was chanting for the opposing point guard (Kyrie Irving) in hopes that he chooses the Knicks in 2019 Free Agency. Meanwhile, the Knicks fan base is currently recovering from the surprise trade of their injured unicorn (Kristaps Porzingis), Trey Burke (on an expiring contract),Â and shedding the contracts of Courtney Lee and Tim Hardaway Jr. for Dennis Smith Jr., 2 future first round picks, and the expiring contracts of veterans, Wes Matthews and DeAndre Jordan.

The Knicks fans have just been put through another whirlwind of emotions, this episode beginning early on Thursday. There you were… going through your daily routine when some rumors begin to hit your phone regarding some meeting where Kristaps Porzingis is frustrated with the Knicks team management and the losing culture.

Your first thought is, “Oh KP! What’s up man? How’s your knee progressing? We really haven’t heard for you in a while. We feel you man, but who isn’t frustrated with the team? No worries, let’s just keep the tank going, keep building, and prepare for next offseason.”

After about five minutes came a report from Adrian Wojnarowski, ESPN NBA reporter in the form of an infamous TwitterÂ Woj Bomb, suggesting KP’s expressed frustrations with the franchise have essentially amounted to a demand for a trade. Just a couple of minutes later… the Knicks are exploring their trade options for KP.

Before you can even catch your breath with Anthony Davis trade scenarios in your head… WOJ BOMB… KP is going to Dallas. Woah. What?! What just happened? How did you go from a meeting to… gone in the snap of Perry and Mill’s finger?! The worst part was the full details of the trade were not confirmed for a couple of hours, probably due to the complications of Dallas’ draft picks, so Knicks nation was in turmoil… to put it lightly. But can you really blame them?

Every Knicks fan was preparing for Super Bowl Sunday just like everyone else and looking forward to the “Big Game” that stops the United States in its tracks for that one sacred Sunday night every February. This also means that the NBA All-Star game, festivities, [which now features a New York Knick… more on that later] and the trade deadline right around the corner. (The new NBA rules have made the trade deadline before the NBA All-Star game recently, probably due to concerns stemming from Boogie Cousins being traded to the Pelicans and told during an interview while in New Orleans for the All-Star game).

Nevertheless, Knicks nation was entertaining Anthony Davis rumors here andÂ Lonzo Ball rumors there, in the ESPN Trade Machine just like everyone else… when BOOM! The best talent to put on a Knicks jersey in a couple of decades is gone for a Steve Francis type-player we skipped in the NBA Draft two years ago, some cap space, and two first-round draft picks that could vest in six years.

All this for a very familiar New York Knicks pipe dream at their shot at two maximum salaried free agents in the 2019 offseason that include Kevin Durant, Kyrie Irving, Kawhi Leonard, Klay Thompson, Demarcus Cousins, and Kemba Walker.

Once the emotion has been removed from the situation and it has been established that the Knicks have moved onto the 2019 offseason by dumping contracts and accumulating draft picks, you realize that the tank is still on and oh yea… New York has a game Friday night… the Boston Celtics are coming to town.

Unfortunately, Dennis Smith Jr. was not active for this game and veterans Wes Matthews and Deandre Jordan also sat out. Taking a look at the game-to-game stat sheet you realize that New York not only dumped salary but have also trimmed the extremely inefficient Tim Hardaway Jr. and opened up Courtney Lee’s pedestrian minutes. This is good news for rebuilding.

This was an unusual game for the rival Boston Celtics coming into Madison Square Garden to face the New York Knicks on a freezing Friday night. The MSG crowd was feeling vulnerable and there was a media circus around New York because of trading Porzingis and the Boston Celtics because of the new flames on the Kyrie-to-NY rumors.

The game went into halftime with Boston up by nine points and the Knicks seemingly more concerned about Kyrie’s every move than the actual result of the game. This is for good reason because the prize of the 2019 season is Zion Williamson and his constant highlight reel game doesn’t allow the fanbase to forget.

Through all the ruckus, the most important aspect of this Knicks team should be growing your young players. Kevin Knox and Damyean Dotson had similar nights on the stat sheet with 21 points and 5 rebounds for Knox & 22 points and 6 rebounds for Dotson. There is optimism for growth in efficiency and defense with these players and the future is bright because these minutes against superstars in the NBA, are priceless.

Recent call up to the Knicks roster, Kadeem Allen, the 53rd pick by the Boston Celtics in 2017, was waived and picked up this season by the New York and Westchester Knicks in a two-way contract. Allen averaged 18 minutes for the Knicks in the past two games but against his former team, Allen received the start, posted 35 minutes and had 9 points, 5 assists, and 4 rebounds.

His former coach, Brad Stevens, had some guy encouraging words regarding the young guard stating that he believes Allen can impact the game with his ball-handling ability, his decision-making, and his elite defense. Unfortunately for Allen, with ball dominant Dennis Smith Jr. coming into the point guard mix, Allen’s role will be diminished.

Luke Kornet, Mitchell Robinson, and Noah Vonleh continued to show promise for the Knicks and DeAndre Jordan will bring some stability to this unit. Vonleh had 11 rebounds and Robinson had 8. Those numbers will surely change when DeAndre Jordan is starting at center, but Mitchell is excited about this pairing because Robinson has a similar build and mimics a young Jordan with his amateur pick-n’-roll and defensive prowess. Robinson will gain priceless knowledge from Jordan in the practice facility as well as on the court… that is… if Robinson makes it past the trade deadline.

Last, but not least, Lance Thomas and youngster Isiah Hicks recorded ‘DNP’s-Coach’s Decision’. Keep in mind that Lance Thomas is one of KD’s favorite players in the NBA, according to KD himself. They played together in OKC along with beloved OKC assistant coach Royal Ivey, who is currently an assistant coach with the New York Knicks.

The Future of the Knicks:

In my opinion, the New York Knicks are not finished dealing before the NBA trade deadline, in four days. The worst team in the league does not need players on expiring contracts like Enes Kanter who has put himself at the center of distraction by complaining about his minutes, kissing the Knicks logo upon entry into the game, joining fan chants during the games such as ‘We Want Kanter’, and negatively commenting on the recent acquisition of DeAndre Jordan because Jordan is 4 years older than him and Coach Fizdale has commented that he wants to get DJ into the rotation. Simply put, the Knicks don’t have time for this nonsense from a player who was -12 in 13 minutes against the Celtics, compared to Kornet -3 in 16 minutes and Robinson’s +1 in 18 minutes.

There is also another factor to consider. As it currently stands, the Knicks roster next year consists of:

If the dream is to give the two max deals and ultimately eat up your salary cap with Kyrie and KD, the Knicks will still have to fill out the remainder of the roster to remain competitive. It will be a tough sell with only the opportunity to offer a 4$ Million exception and veteran minimums for a chance to play with Kyrie, KD, and the Knicks 1st round pick.

This opens the door for the Knicks to acquire players that might fit into their future and have a cap friendly deal. New York has to be considering the idea of two potential superstars taking a minor pay cut to fill out the roster, similar to the Lebron-Wade-Bosh Miami Heat. Players that fit this bill for me are Thon Maker and Jabari Parker.

I also look for the Knicks to put their future first round picks on the table to inquire about superstar Anthony Davis, after it is has been reported that the New Orleans are searching for at least two first-round draft picks for The Brow. But again, that is the home-run.

When talking about reality, I expect the Knicks to at least trade Enes Kanter. Emmanuel Mudiay and Noah Vonleh both have expiring contracts and could be interesting trade pieces, depending on if the Knicks are planning on re-signing them next season in Free Agency.

Dennis Smith Jr., DeAndre Jordan, and Wes Matthews will make their Knicks and Madison Square Garden debut today in a SuperBowl matinee. Coach Fizdale’s former team comes to town for a 1:00pm tip-off with quite a bit of uncertainty regarding their franchise and the future of their cornerstones, Mike Conley and Marc Gasol.

This is game I believe this Knicks will win due to the energy of the MSG crowd and their newly acquired players (look for DSJ to light up MSG in his home debut), the energy of the Knicks players due to this game being for Coach Fiz, the historical wackiness of Super Bowl Sunday NBA matinee games, and a desperate Knicks team burdening 12 straight losses.

My advice: Put away your Tank-for-Zion caps for one day and enjoy what could be low-key the best piece of this trade, a young explosive guard from NC State named Dennis Smith Jr. who some argue should’ve been a Knick from day 1 in the NBA. DSJ will also be the only Knicks representative in the All-Star Game festivities, this time in the Slam Dunk contest. The last Knick to be in the Slam Dunk contest was James White in 2012-13 season and the last NBA Slam Dunk Champion to be represented by the New York Knicks was back-back from 2008-09 & 2009-10, Nate Robinson.