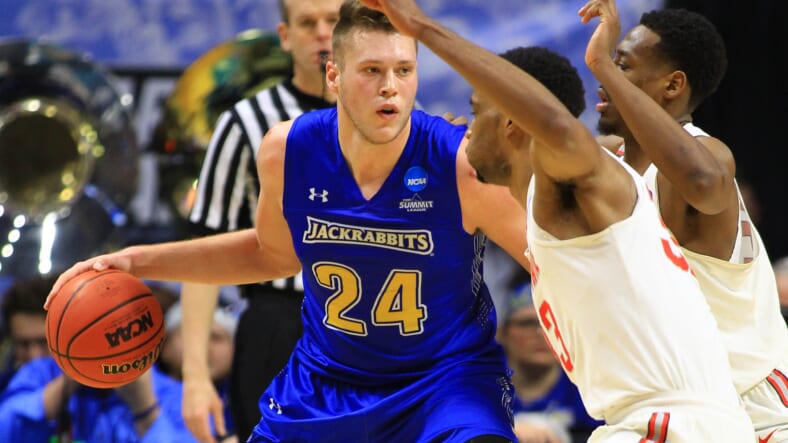 In the 2018-2019 season, the New York Knicks offense has been a liability, 26th in the league in PPG, and dead last in field goal percentage. With that being said, the Knicks need offense and only have one first round pick, and need to find ways to get young offense without giving up that much, or anything. Today we look at five mid-major seniors that have proven to be great scorers that the Knicks could get in the second round, or sign as an undrafted free-agent.

Chris Clemons is one of the most prolific scorers in college basketball history, currently eighth all-time with over 3,000 career points. In his senior season, he leads college basketball at 29.8 PPG and shoots the three ball at 38 percent, and is an 86 percent free-throw shooter. His only drawback is his defense. At only 5’9, he can throw it down and gets over a steal a game, but will likely have trouble defending high level guards like James Harden, who stands at 6’5. He does rebound very well for his size, with over five a game. He could be an off-the-bench option to come in against the second string and get a few buckets and come right back out. Clemons will likely go undrafted.

Mike Daum is the best forward in college basketball that nobody talks about. He averages well over a double-double a game at 25.4 PPG and 11.6 RPG. At 6’9, he shoots well and his field goal percentage is over 50 percent. He is having a down year from three at 36 percent, but shot it 43 percent just a year ago. His weakness is defense, as he averages less than a block and a steal per game, numbers that should be higher for his size. Daum could be a role player that boosts the Knicks offense and rebounding numbers. Daum will likely be a mid to late second rounder.

Justin Wright-Foreman is one of the best players in the country, and is third in the NCAA at 26.3 PPG He doesn’t take a lot of shots either, with his field goal percentage at 51 percent and his three-point percentage at almost 43 percent. He is very efficient and only turns the ball over about twice per game. His free-throw shooting also makes him a guy you don’t want to foul, at almost 88 percent. Wright-Foreman could be good enough to be a sixth man, but his defense is below average, with less than a block and a steal per game. Wright-Foreman will likely be an early to mid second rounder.

Matt Morgan is one of the best the historic Ivy League has ever seen. He is currently at 10th in the nation in PPG at 23.6. His field goal percentage is around 52 percent and shoots the three at over 45 percent. Statistically, he is the best shooter on this list. Morgan is one of the most efficient players in the NCAA, and leads the country in POS/G (Per Synergy Basketball). He gets almost three assists and five rebounds at 6’2, putting him just under the average NBA guard height. His defense is improved and could be a three-point specialist in the NBA. Morgan would be a late second rounder to undrafted.

Jordan Davis is 11th in the country in scoring at 23.5 PPG, but his game does have a few drawbacks. He is one of the best all-around mid major players, averaging five assists and five rebounds a game. His defense is average, providing over a steal a game. But his shooting percentages are worrisome, but improving. He shoots 47 percent from the field, but just 37 percent from three. This season is the first season that he shot over 30 percent from three, and his free-throw percentage is at 81 percent. Before this season, his highest was at 70 percent. Davis is improving, but not quite NBA ready. He may benefit from a year or two in the G-League. He will likely go undrafted.