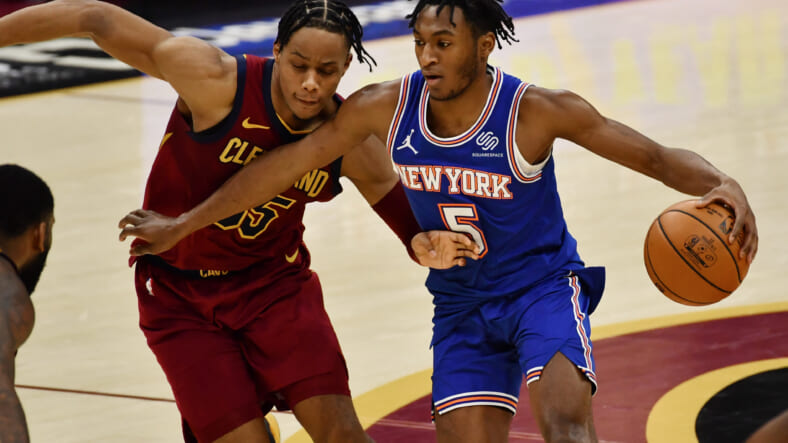 When the New York Knicks selected Immanuel Quickley with the 25th overall pick, nobody expected him to be a revelation. Through 24 games, Quickley is averaging 12.4 points, 2.6 assists, and connecting on .412% of shots from the field per game. Heâ€™s also shooting .370 from three-pointer and has missed just four free throws this season.

Quickley has been an offensive weapon coming off the bench, as head coach Tom Thibodeau continues to start Elfrid Payton over the Kentucky product. At 21 years old, heâ€™s just adapting to the NBA but has made significant strides forward in recent weeks. As he becomes more comfortable with how the game is played at the next level, the rookie is beginning to slow things down and improve his vision on the floor.

We could sit here all day and list the positives Quickley has brought to the team in just a short period of time, but he has weaknesses, and his comes on defense.

In an interview with the NY Post, former Knick Charlie Ward noted one thing Quickley will improve on with time on the floor:

â€œHeâ€™s definitely an offensive guy who can score the basketball,â€™â€™ Ward said of Quickley. â€œOur games are different. But you need late first-round picks that can play a role and be productive and potentially be a solid rotation player. Most times you look at high draft picks and put a lot of weight on them. But itâ€™s all of them. Anyone who comes in the system, youâ€™re trying to find the right fit. I think he fits a role.

How has Quickley looked on defense so far with the New York Knicks?

Quickley has an agile and bouncy nature to his play, but he doesnâ€™t have the necessary strength and fundamentals on defense just yet. He still developing in that area, averaging 0.4 steals per game. You can see his anticipation and tamed-aggression growing each and every game, which is a positive sign, but thereâ€™s a reason Payton continues to start games.

Quickley is it a pesky defender, putting immediate pressure in full court situations after scoring. He sprints to his assignment, tantalizing them with energy and pointing out unmarked assignments off the ball. His communication with Thibodeau has been impressive between plays, and it shows heâ€™s taking to coaching well. He also does a solid job calling out switches and pressing the perimeter. He lacks the strength to push through screens, but heâ€™s so elusive he can sometimes bounce around them.

It will take time for Immanuel to elevate his game on defense, but the Knicks trading for Derrick Rose will help him develop even faster. A mentor and teacher like Rose will offer him a new perspective on how to play the game and one that has done it for quite some time. I have no doubt that Quickley will become one of the best players on the Knicks if he isnâ€™t already, which is so exciting considering heâ€™s only played 24 games in his young career.