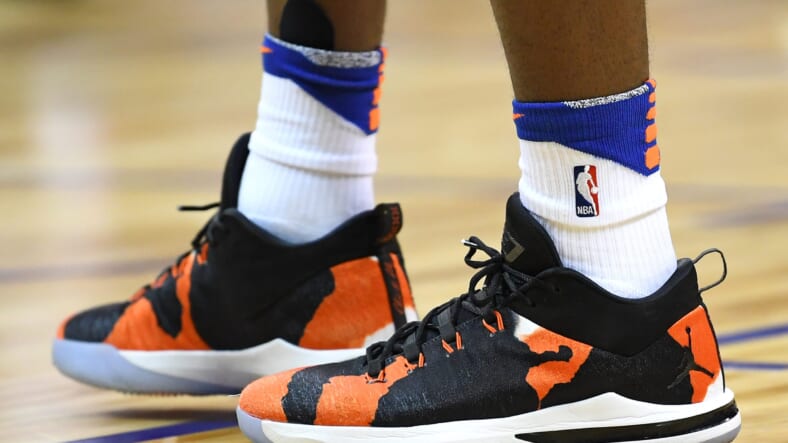 Oladipo wouldâ€™ve been a no-brainer for the Knicks to â€œpursueâ€ or â€œtargetâ€ before he got hurt.Â  He ruptured quad tendon in his right knee on Jan. 23 against the Toronto Raptors and missed the remainder of the season.

Before fans start saying â€œthe Knicks should be all inâ€ on pursuing Oladipo, letâ€™s relax first.Â  The name fans need to remember is Antonio McDyess.Â  The Knicks signed an injury prone McDyess and it was just an awful situation.Â  The team canâ€™t afford to have another situation like that one their hands.

This is not saying that Oladipo is like McDyess.Â  Thatâ€™s not what weâ€™re saying.Â  But the Knicks havenâ€™t had the best luck with giving players big money who are injury prone.Â  Everything in the medical world and rehabilitation are different.Â  Itâ€™s more advanced than it was when McDyess was in the league.Â  Players do have a better chance of coming back than in decades past.

If, big if, the Knicks were to go after Oladipo they would need to do their homework on his injury.Â  Despite all the medical advances, you still have to be cautious of a player whoâ€™s had a, almost, career-ending injury like Oladipo.Â  Yes, he came back this season and is averaging 13.8 points a game.Â  However, even though he was technically healthy, he wasnâ€™t his former all-star self.

Also, the Pacers arenâ€™t going to let Oladipo go.Â  That just isnâ€™t going to happen. Heâ€™s probably the best player to come through Indiana, minus Paul George, in a decade.Â  Even with his injury, you canâ€™t let a player leave.Â  Although, according to SNYs Ian Begley, the Pacers offered Oladipo a 4 year, 80 million dollar extension and he turned that down.Â  Could or should the Knicks look to strike?

Many Knicks fans will want Oladipo.Â  They just have to remember that after a possible career-altering injury, it could be difficult for Oladipo to return to that peak form.Â  The New York Knicks just need to be careful if that want to truly go down that path, of injury prone players, again.