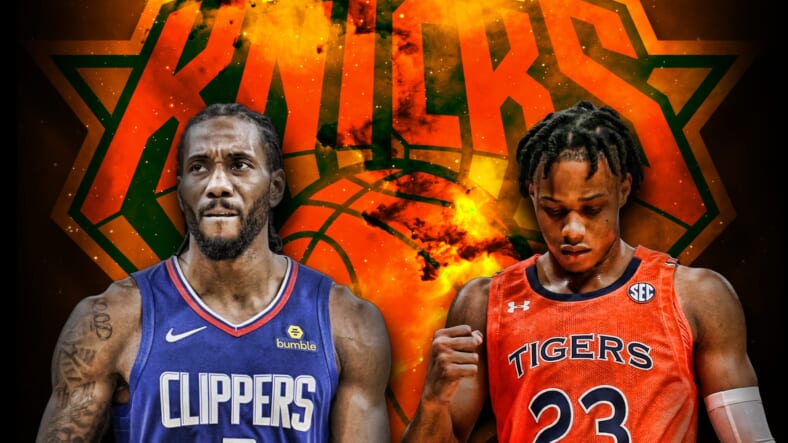 Thereâ€™ve been plenty of draft, trade, and free agency rumors circulating the New York Knicks’ franchise these past couple of days. A ton of things could happen on draft night as well as in free agency. The one thing thatâ€™s certain is Isaac Okoroâ€™s winning style of play is needed on a young developing New York Knicks roster.

Isaac Okoro emulates his playing style after players like Jaylen Brown, Andre Iguodala, and Kawhi Leonard. Okoro, praises Kawhi Leonardâ€™s approach to the game during a virtual interview with an NBA analyst.

Isaac Okoro was interviewed by NBA Draft analyst Mike Schmitz of ESPN. Mike Schmitz is also a contributor to a private scouting and analytics service by the name of DraftExpress. The two completed a virtual ESPN film session comparing Isaac Okoro’s style to other current and former NBA players.

What would Okoro bring to the New York Knicks?Â

The intangibles that Okoro brings to the game on a nightly basis was evident during the entire virtual film session. Okoro’s motor, defense, defensive IQ, finishing ability, and Okoro’s underrated playmaking ability showed that there could be a case made for him to potentially end up being the steal of the 2020 NBA Draft. The prospect out of Auburn has tremendous upside and he’s shown time and time again on the basketball court that he’s a bonafide winner during his freshman year at Auburn.

Tom Thibodeau along with the rest of the current Knicks coaching and developmental staff would be an ideal opportunity for Isaac Okoro. The Knicks staff consist of experienced teachers from the Kenny Paynes’ to the Mike Woodsons’ and Johnny Bryants’. Combine the knowledge of the Knicks’ developmental staff along with Isaac Okoro’s desire to play defense and learn the game, and the potential to become a two-way star for years to come is suddenly a strong possibility.

Overall, The New York Knicks are in a position to select a strong defensive-minded young player filled with potential. The question is whether or not a team selecting before the Knicks will reach for the young talented prospect out of Auburn University.