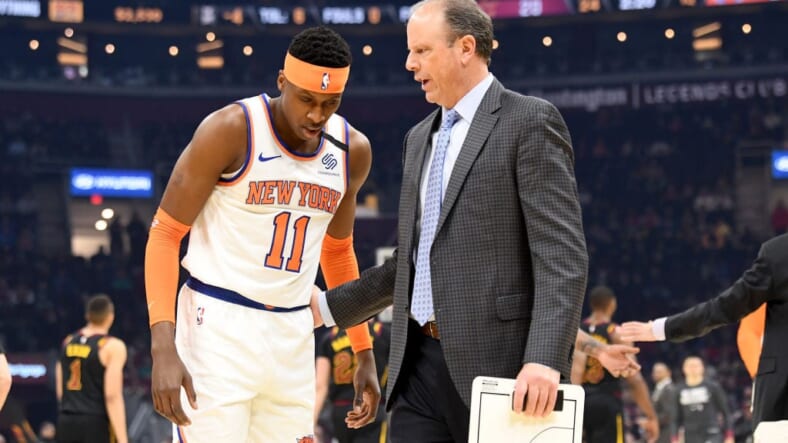 CLEVELAND, OHIO – JANUARY 20: Frank Ntilikina #11 listens to Head coach Mike Miller of the New York Knicks during the first half against the Cleveland Cavaliers at Rocket Mortgage Fieldhouse on January 20, 2020 in Cleveland, Ohio. NOTE TO USER: User expressly acknowledges and agrees that, by downloading and/or using this photograph, user is consenting to the terms and conditions of the Getty Images License Agreement. (Photo by Jason Miller/Getty Images)

Interim Coach Mike Miller believes the best development is experience. He also believes winning is a part of development as well. Miller explains his belief in development after a Knicks loss to the Washington Wizards earlier in February.

Recent Knicks head coaching search has landed at the front doorsteps of Tom Thibodeau. Thibodeau never notably expressed his real feelings on player development, however, former players such as Karl-Anthony Towns expressed displeasure on how Thibodeau handled the development of younger players in the past.

Meanwhile, midseason in a very unpredictable Eastern Conference, Knicks sit in 13th place, seven games out of the playoffs. The New York Knicks are 13-20 (.394) since Miller took over – a clear improvement on the team’s terrible 4-18 (.182) start under prior coach David Fizdale.

Knick players seem to respect Mike Miller’s approach to everything. Therefore, it would be wise for the Knicks to lean toward keeping and promoting Interim Coach Mike Miller to the Head Coaching position especially if Miller and the Knicks close out the 2020 NBA season stronger than most will expect.

Overall, right now the best development for the Knicks is winning and experience not an overload of minutes. If an expert in player development doesn’t believe in overloading young players with huge minutes for developmental purposes then why should we?