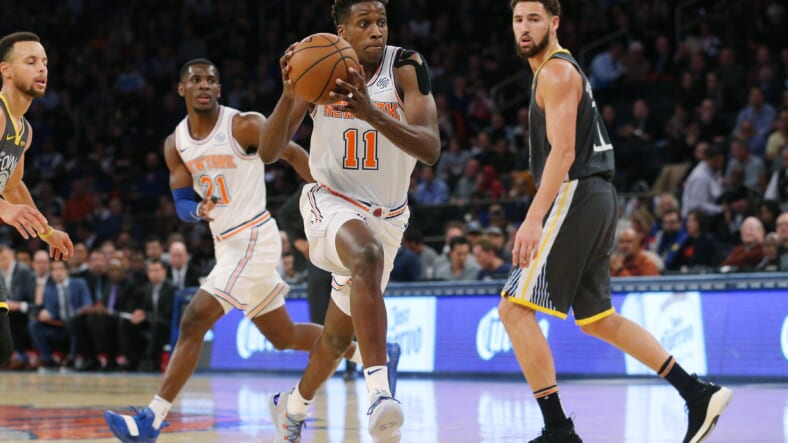 Coach David Fizdale summed up the fifth game of the season perfectly in his post-game press conference, the Knicks are playing college basketball (40 minutes) and they need to play professional basketball (for 48 minutes).

The two franchises entered into the Friday night matchup on opposite sides of the NBA spectrum. The Warriors are fresh off a game against the Washington Wizards, where a man by the name of Wardell Stephen Curry II posted a pedestrian 51 points in 31 minutes, going 12 of 24 from the field and 11 of 16 from the three-point line. This game became so lopsided that Coach Steve Kerr opted to bench Curry in the 4th quarter and did not allow the two-time MVP to challenge (and probably eclipse) his personal career high of 54 points in one game and the NBA record for three pointers in a game [13]. The game was so out-of-hand that Kevin Durant drove in to the paint, threw down a tomahawk jam with such little resistance, and immediately asked to be subbed out of the game due to, what appeared to be, lack of competition, as KD seemingly mouthed “they weak” to his teammates and coaches on his way to the bench. Plain and simple, this game was total domination by the Warriors before they set off on their three game road trip.

On the other hand, the New York Knicks are reeling off their worst performance of the young 2018 NBA season, coming off a 110-87 rout against the Heat in Miami-[W]ade County. It was especially disappointing for Coach Fizdale in his Knicks coaching debut back in Miami, where there was pre-game praise fluttering around the locker rooms– from D-Wade to Coach Spoelstra to Coach Fiz. The trips down memory lane ranged from intense practices, to rats in the video room, to Wade plucking on the strings of emotionally vulnerable Knicks fans by claiming that Fizdale’s player-coaching style and culture will attract future free agents to New York. Everything was all lovey-dovey until the Knicks got out-coached, out-played, and out-classed against a team using the same strategy of ‘run-and-gun’ and ‘space-and-pace’Â Walt Frazier voice. This game put the youngest team in the NBA on notice that the growing pains will hurt, but the Knicks had to get their act together quickly as … Drum Roll PLEASE… THE CHAMPS ARE HERE!

Coach Fizdale hinted that changes were looming in regards to the Knicks starting lineup, and boy did Coach stir things up pre-game. Not only did Damyean Dotson (a.k.a D-Dot) and Mitchell Robinson (a.k.a. Lobinson) get their first NBA career starts alongside Tim Hardaway Jr. (a.k.a. THJ), Noah Vonleh also joined the five– which made for one very unhappy 6′ 11″ Turkish center. Enes Kanter, who opted into the last year of his $17 million contract with the Knicks this past summer, was left off the starting lineup against the defending champs for rookie second-round pick and a 2014 draft pick on his 4th NBA team. This justifiably made Kanter angry and in the postgame presser, the disgruntled center expressed his displeasure with an insolent tone, explaining that Coach Fizdale wanted the center to lead the second unit. It is understandable why Kanter, who averages 11 points and 7 rebounds in his career, was frustrated pre and post game with coaches decision, however Enes did himself no favors with his lethargic defense in the 4th quarter that has actually forced the finger to be pointed at Fizdale for his questionable decision making… for not taking Kanter out early enough.

Say what you will about the bold starting lineup that Fizdale put out there against the defending champs, but Coach wanted to spark the team– and spark the team he did.

The New York Knickerbockers came out firing on all cylinders against the big, bad Golden State Warriors– who have secured 3 out of the last 4 NBA Larry O’Brien championship trophies, and barring a wild upset, will be hoisting a 4th trophy in 5 years at the end of this season.

The emphasis with the new starting lineup for New York, which consisted of the French Prince, D-Dot, THJ, Vonleh, and Lobinson, was obviously defense. The first half had it all for the Knicks– second chance opportunities, quick transition baskets, and the home team established a fast paced offense created off long rebounds, due to intensity on the defensive side of the ball. It is exactly how the coaching staff has been drawing up the game-plan since Summer League and Preseason, but the difference in the first half was, the players were executing magnificently.

The Knicks starting guards had a great game, with the French Prince putting up a career-high 17 points in just 26 minutes, on 6 of 11 from the field and 3 of 7 from three point territory. D-Dot added 12 points and 7 rebounds on 41% shooting from the field and 33% from downtown and also showed flashes of become a future “3 and D” starter for the Knicks. More importantly, the defensive pressure by the young Knicks guards against the superstar Warrior guards will provide a glimmer of hope in the eyes of Knicks fans everywhere.

Coach Fizdale has something cooking with the defensive intensity portrayed from the new first unit, accompanied by the offense and rebounding produced from the second unit which consisted of Trey Burke, Allonzo Trier (a.k.a. Iso-Zo), Enes Kanter, Lance Thomas, and (Super) Mario Hezonja. Although Kanter was clearly disgruntled before and after the game for being plucked out of the starting lineup, he provided a big spark off the bench for the team putting up 8 points and 13 rebounds, but more importantly, providing second-chance opportunities and stimulating intensity in the Garden by jawing at KD and Boogie Cousins. Kanter and Boogie’s bickering escalated to the point where Boogie, who was in sweet clothes because he is still recovering from a torn Achilles, was thrown out of the game. Gotta love Boogie starting the 2018-2019 season with technical fouls on the stat sheet before recording any minutes played.

The Knicks and the Warriors went into halftime tied at 52 with the Knicks leading in the rebounding column, 26 to 17. New York was even able to get over that dreaded 3rd quarter hump that usually leaves the team limping into the 4th quarter and again the Garden faithful were thinking… There’s hope! And then… like clockwork…

The Knicks led by as much as 5 points in the 4th quarter with just over 10 minutes remaining, and were holding onto a 1 point lead with 7:38 left in the ballgame, before that fairytale ended in a 28 point blowout. You may be looking at those numbers, just objectively baffled, thinking to yourself, how could that possibly be? Well brace yourself, because in less than 8 minutes of gameplay, the Warriors went on a 35-6 run and outscoredÂ New York 47-16 in the 4th quarter. Kevin Durant led the surge, going 3 for 5 from downtown with 15 points, Steph added a trey, Jonas Jerebko and Alfonzo McKinnie joined the three-point party, and even Draymond hit one! Not even 22% Shooting for the all-star center, from downtown, could stop the 4th quarter avalanche by the Warriors in the Garden.

The Warriors roster was efficient there was contribution from top to bottom starting with KD who ended the game with 41 points, 25 coming in the 4th quarter, to Curry who poured in 29 points shooting +50% in the field and from three, to Jonas Jerebko and Alfonzo McKinnie who had key plays in this game, especially in the fourth quarter.

Simply put, the New York Knicks ARE WHO WE THOUGHT THEY WERE!Â Dennis Green voice (May he R.I.P.). A young and immature team trying to figure it out on the fly. However, personally, I am taking the “innocent until proven guilty” approach with Coach Fizdale and I implore the Knicks fan base to do the same. This man has been watching NBA game tape for decades in cold dark basements (for effect) and has earned the respect of coaches, personnel, and players across the league (minus Marc Gasol). Maybe it’s taking it a little too far to get upset with the first year coach in his fifth game, with the youngest team in the league, for substitutions late in the game. Ironically, the critique is over Fizdale not going back to his bold starting lineup quick enough.

To clarify the questionable coache’s call late in the game–Trey Burke had the hot hand in the 3rd quarter and that led to Coach Fizdale taking out Burke and Kanter a little too late into the 4th quarter, instead of switching back to the defensive lineup. Having Iso-Zo and Burke on the floor at the same time can lead to that ‘stand-and-watch’ offense Knicks fans are accustomed to. Personally, I would’ve liked to have the French Prince playing floor general for this team and facilitating the offense, while continuing his defensive pressure and using his wing-span to his advantage. Of course, all of this rhetoric would’ve sounded different if Trey and THJ were more efficient from the field, a feat not so easily conquered.

Playing Monday morning [coach] is a tradition across all sports and I do not expect it to change, but moral victories aside and simply put, Coach Fizdale managed a great game and put his players in a position to succeed. The Knicks were able to complete some tasks and accomplishments along the way, but unfortunately, the team was not able to complete the mission. Coach admitted in the postgame presser that this young team isÂ learning on the fly as the roster hasn’t been in these situations ad these growing pains hurt but are valuable. The roster mustn’t be happy to just be in the game, they must be in it to win it. Queue Coach Herman Edwards YOU PLAY TO WIN THE GAME!

During the postgame interviews, Tim Hardaway Jr. doubled down and set the record straight on the tone of the 2018 New York Knicks. When the guard was asked if he was satisfied gaining the respect of the NBA champion Warriors, he replied, “thanks but no thanks, on [the] moral victories.”

Next up: The Knicks have the weekend off before hosting the Brooklyn Nets at Madison Square Garden on Monday 10/29 at 7:30PM. Â The New York Knicks dropped a preseason game at the Garden on October 12 and lost to their in-state rivals on October 19th at the Barclays Center.Â This upcoming matchup isÂ a virtual must-win for the 1-5 Knicks, who are seemingly in turmoil, still seeking their first win since the opener against the lowly Atlanta Hawks.