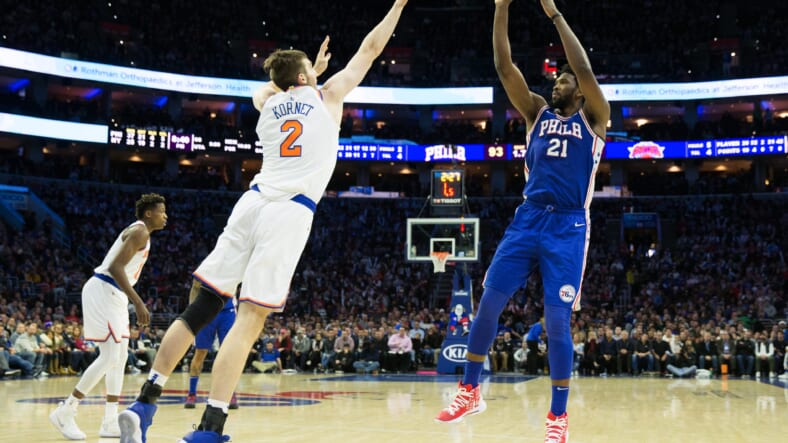 Yesterday I sat down at a restaurant to enjoy some dinner and New York Knicks basketball. Lets just say, thank God the food was good. In the latest episode of ‘How bad are the New York Knicks?’,Â the Knicks got torched by their long time Atlantic Division rivals, the Philadelphia 76ers, 131-109. Yikes.Â I would love to tell you the game wasn’t as bad as the score, but Iâ€™d be lying.

The 76ers did whatever they wanted on the court, going 15 for 30 (50%) from three point land. Ben Simmons notching in a triple double while shooting 50%, three turnovers. Joel Embiid racked in a double-double. Jimmy Butler had an efficient 20 points including 8 for 10 from the free-throw line. And J.J. Redick took his volume shots and ended up with 14 points. For the cherry-on-top for the 76ers, 21-year-old rookie from Wichita State Landry Shamet had a career-high 17 points. Sure enough, [Wichita State] Shocker Nation must be a little bit proud to stick it to the Knicks after cutting their beloved Ron Baker earlier this month, who has now signed with another I-95 team and Eastern Conference foe, the Washington Wizards.

State of the Knicks:

Another difficult game for the New York Knicks players and fans to swallow. New York has allowed 110+ points in the last 12 games, which is tough for all parties involved, besides of course, opposing game plans and offensive strategies. Do not forget, as you’re going through your NBA scoreboard to see if the other bottom NBA teams are winning their games for the Knicks 2019 Tankathon (Good news: Phoenix Suns won), the players, staff, and front office on the New York Knicks also have egos. They’re playing for their professional careers and so the best case scenario for the Knicks is to remain competitive, show heart, but still lose games. However, these blow out losses just won’t cut it.

Nonetheless, it’s not allÂ bad. Emmanuel Mudiay continues to impress at the point guard position. Courtney Lee is starting to get his feet wet on the basketball court after overcoming his neck injury. Enes Kanter continues to put up decent numbers despite horrific defense. DaymeanÂ Dotson, Noah Vonleh, and Kevin Knox are continued to slowly improve in Fizdale’s system. Dot had a great game posting 14 points in 22 minutes on 6 for 11 from the field, but while also going 2-6 from 3 point land.Â Kevin Knox has also been on a surge, averaging about 20 points and over 40% shooting from 3 point land in the last 6 games. Even Luke Kornet is beginning to look more and more like an NBA player (at least on offense).

FUN FACT: Kornet in his four years with the Vanderbilt Commodores,Â holds the NCAA record for three-pointers made by a 7-footer with 150 3’s, and leads Vandy’s all-time shot-blocking record books, with 210 blocks.

Tim Hardaway Jr., battling Plantar Faciitis in his foot, still dropped 27 points, while going 10 for 10 from the free throw line.

Which brings us to the most heated and controversial IntraKnicks conflict of the 2018 season, Frank (NIK UH LEE NUH). The French guard played 16 minutes and ended with 3 points, going 1-7 from the field, and adding 2 assists and 2 rebounds. Tough night for Frank after he has been averaging 14 points since riding the bench for three straight games in a Coaches Decision. Coach Fizdale seems to have his hands busy with Frank, by explaining in his post-game press conference comments that Coach attributes the young French guard’s inconsistencies to a mental aspect, rather than an ability deficiency.

Why Should you Remain Optimistic?

The best case scenario for the Knicks 2019 offseason is to trade players that have expiring contracts. Do not anticipate resigning some players or trading players that are not part of the Knicks future. The players that fall into the categories are Courtney Lee, Trey Burke, Mario Hezonja, and Enes Kanter.

Unfortunately, the New York Knicks can’t lose every game in their mission for Zion Williamson. the consensus #1 overall prospect. According to Brian Windhorst of ESPN, the Knicks 2019 offseason has hit boom-or-bust potential. They have a surplus in cap-space and ability to sign Porzingis. But, this comes with the contingency of signing free agents in 2019 and then offering KP his extension. The NBA, the Knicks front office, and Knicks Nation already have KP pencilled into the Knicks roster for the foreseeable future. But as we know, nothing is guaranteed in sports.

After that doom and gloom news, do not fret! The Knicks have a good ‘Friday Night Knicks’ spot coming up against the Atlanta Hawks in the Garden. This is the same team that the Knicks have beat twice already this season. In both games, Frank has played great defense against rookie point guard from Trae Young. The two wins against the Hawks may not be a big deal normally, but the Knicks have 9 total wins.

Facing the Atlanta Hawks at home after losing 8 of the last 9 games, is exactly the medicine the New York Knicks and Madison Square Garden needs leading up to a Noon Matinee in Madison Square Garden against Giannis ‘The Greek Freak’ Antetokounmpo andÂ the Milwaukee Bucks, on Christmas Day, in front of the world!

Also… don’t worry… KP will probably resign with the Knicks.