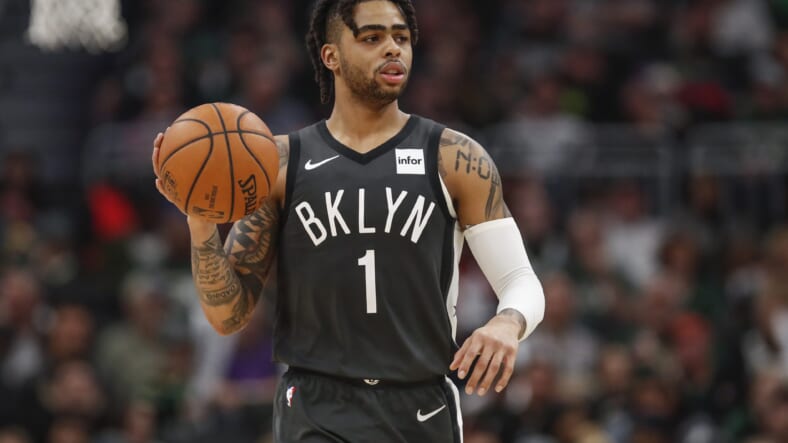 With Kyrie Irving reportedly taking his talents to the Brooklyn Nets, the New York Knicks are in a good position to pursue D’Angelo Russell for their starting point guard position.

Irving, who was unhappy in Boston, will make his return to New York with the Nets being the favored team. The atmosphere and direction they’re headed seem to be more in-line with Kyrie’s goals. That will certainly influence the decision of superstar Kevin Durant and other free agents looking to make a move to the Big Apple.

Russell has already stated he wants to stay in New York, which is a good sign for the Knicks since it would be a short drive up to Madison Square Garden.

â€œIf Irving ends up signing in Brooklyn, it may have an interesting ripple effect on the roster, particularly Dâ€™Angelo Russell.”

â€œRussell, a restricted free agent, will likely draw significant interest on the open market. The 23-year-old is coming off of an All-Star season in which he helped lead Brooklyn to the playoffs. Members of the Pacers organization are high on Russellâ€ [SNY]

After drafting RJ Barrett with the 3rd overall pick on Thursday night, it leaves the point guard position thin. They do have Dennis Smith Jr. and Frank Ntilikina at the spot, but the reality is neither will likely be franchise caliber players. Smith Jr. is a solid offensive performer but needs to work on his defense.

Russell presents an elite option that likely wouldn’t require a max-contract to sign. That allows the Knicks to bring in a superstar and more, which would help the team ‘establish a sense of veteranship and stability. Additionally, having quality depth is always a positive thing.

However, they should still be focused on providing their young players with ample playing time to aid their development. I do think, though, that Russell would be a great addition for the Knicks.