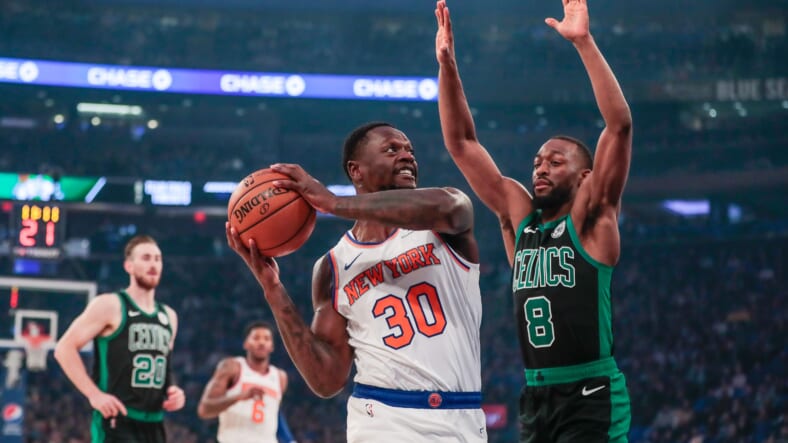 The New York Knicks face off against the Boston Celtics on Wednesday evening, coming off a difficult loss against the Brooklyn Nets on Monday. Losing by just two points to Brooklyn, the Knicks desperately needed a win over a playoff-bound team, but once again, they force-fed the ball to Julius Randle in the final moments, who missed another shot to give the Knicks a chance at victory.

Despite the loss, Randle finished with 19 points, and second-year guard RJ Barrett earned 22. Barrett has experienced solid development this season at 20 years old and was red-hot shooting in the fourth quarter despite Julius earning the final shot of the contest.

The New York Knicks need to win against the Celtics:

Against Boston, another team who is contending for a playoff spot, the Knicks should have an easier time. It has been reported that starting point guard Kemba Walker will sit against New York, giving them a bit more flexibility with their defensive matchups. New York is currently just .5 games behind Boston, who will take on the 76ers on Tuesday.

Kemba Walker will play tonight and sit tomorrow night against New York. There was no serious consideration given to flipping it because of the standings.

Coming off back-to-back games, Boston could be dealing with a bit of fatigue, which is why they are sitting Walker. The star point guard is averaging 17.9 points this season at 30 years old, his lowest since 2014 with the Bobcats. In fact, this is the first time in five years he missed out on the All-Star game.

Nonetheless, Boston will be a far easier opponent without Kemba on the court, and the Knicks must take advantage of this situation. They have an opportunity to overtake them in the standings, especially if they lose to the 76ers. Currently, New York is just one game below .500 and have struggled to close out games against competitive teams. Most recently, they blew a lead against the Minnesota Timberwolves, missing a last-second shot to win the contest.

A big victory over Boston and then subsequent matchups against the Memphis Grizzlies and Toronto Raptors will offer them an opportunity at reconciliation.