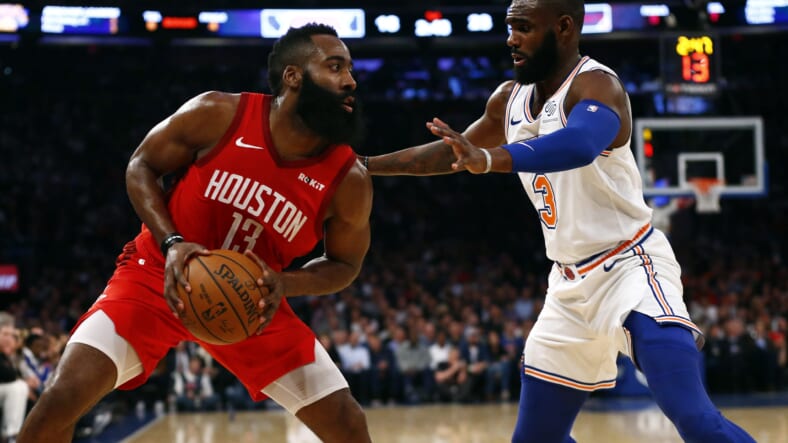 The New York Knicks lost their 7th straight game in a nail biter, 114 to 110, against the Houston Rockets and the hottest player in the NBA, James Harden.

The Knicks rolled out a lineup of Mudiay, Hardaway Jr, Vonleh, Knox, and Lance Thomas against the Houston Rockets led by Harden and featuring Kenneth Faried who was recently acquired to fill in for the injured Clint Capela. For the Knicks this is an interesting lineup change with Luke Kornet injured and the Trade Deadline looming (more on that later).

Starting from the beginning:

The first basket made, in the Knicks 3rd game in the last 7 days, came off a James Harden And-1Â three-pointer. At that precise moment every single Knicks spectator had the same thought “it’s going to be a long night” … and it sure was… but not for the reasons you may think.

The Knicks had a legitimate shot to win although James Harden tied Kobe Bryant’ record for points by a visiting player in the Garden with 61. Despite Harden’s best efforts, he was one-point shy of the overall individual points record in one game, set by Carmelooooo AnthonyyyyyyyyyyyÂ (Mike Walczewski voice [MSG PA announcer]).

“The Beard” has been on a tear in the NBA averaging 52 points per game over the last five games with, remarkably, zero of those points coming off an assist! Not sure which statistic is more impressive.

Tim Hardaway Jr. did his best to match the Rockets offensive style in the first half by scoring 16 points, but ended the game with just 21 points.

In a game where Harden was seemingly scoring at will, the Knicks brought their own dog to the fight as their undrafted rookie stepped up to the plate and broke out of his slump for a career day.

The New York Knicks were on a 10-0 run within 5-minutes, but the Houston Rockets recovered quickly and had the game seemingly in hand; up 7 with 2 minutes and 30 seconds, before the chaos ensued. Mudiay closed in on the lead with a drive the basket and Eric Gordon had a key three-pointer, but it was mostly the Harden and Trier show in the last 2 minutes.

It began with coach David Fizdale receiving his second technical foul for (maybe?) saying something to the referee, which resulted in an automatic ejection and led to a mini-tirade by Coach Fiz that ignited the Garden crowd in crunch time. There was also an all-time blunder on an inbound play with under 1-minute left that put the Knicks within 1 point of the Rockets. On an inbound play after a made basket, P.J. Tucker, a well-respected veteran in the NBA, let the ball bounce inbounds as if he was trying to kill a dead ball on a football punt, in a Top 10 Shaqtin-A-Fool moment.

Iso-Zo was living up to his nickname as he went toe-to-toe with Harden and put the Knicks up by one with 20 seconds left in the game. From there came an Eric Gordon coast-to-coast 3 pointer followed by a defensive play on a Vonleh inbound that led to a Harden steal, dunk, and just like that… game over. Rockets win by 4.

The Knicks are 10-36, including a current seven-game losing streak and 1-14 in the last 15 games. No matter how you slice the numbers, the Knicks have settled themselves into the dark shadows of the NBA and everyone’s eyes are on the May 14th, NBA Lottery prize. But of course, before getting there, there are steep mountains to climb for this organization in their 36 remaining games.

First and foremost, the NBA trade deadline is February 7th, which is just around the corner. Today the Knicks have officially declared that Courtney Lee, Tim Hardaway Jr., and Enes Kanter are on the trading block. New York has reportedly been adamant about not attaching assets to get rid of players and/or contracts such as Lee and THJ.

This is great news for the New York fans who do not have much faith in the organization and front office, with an important 2019 offseason looming. The New York Knicks, along with Coach David Fizdale, Scott Perry, and Steve Mills have done a great job thus far. Do not forget they obtained Kevin Knox, Mitchell Robinson, Trier, and Vonleh this offseason. They have a plan and it is working.

Enes Kanter and the Knicks have been on an interesting ride this season. It began with the Turkish center getting reprimanded publicly by the Turkish government, to Kanter’s offseason social media escapades trying to figure out if he will opt in or out of his contract with New York. Recently has not been able to make the trip with his team to London due to his conflict with Turkey and has not only been benched but completely removed from the rotation.

Kanter was frustrated with being taken out of the starting lineup for Luke Kornet, but with Kornet hurt Enes was not only expecting to slide back into the starting lineup but claimed he was told he would start the Rockets game. Kanter did not play with a Coaches decision. Fizdale defended his decision by saying that nothing was set in stone in the morning and that he essentially reserves the right to make changes to put his team in the best position to win. That’s an extremely cliche answer in a dicey situation with a disgruntled player who went from being promised a starting position to not playing at all, with no communication. That spells 4 words… See ya later Enes.

When Coach Fizdale was asked if he was concerned about Kanter as a distraction and he joked, Â “What are we going to do, lose more games?”

This was a tough loss for the New York Knicks morale and to see the bright side of the 2018-19 Knicks season, you really have to go searching into the big picture.

Mitchell Robinson, the French Prince, Kevin Knox, Damyean Dotson, and Emmanuel Mudiay are all slowly progressing in the NBA and they continue to grow while piling up losses. These losses aren’t so good for their morale and culture, but all will be forgotten when the NBA Draft Lottery rolls around. Either if you’re completely against the idea of wanting your team to lose, any wins accumulated are completely useless as the Knicks have virtually no chance to make the playoffs this year.

Shed Contracts. Grow as a team. Have a bottom three record.