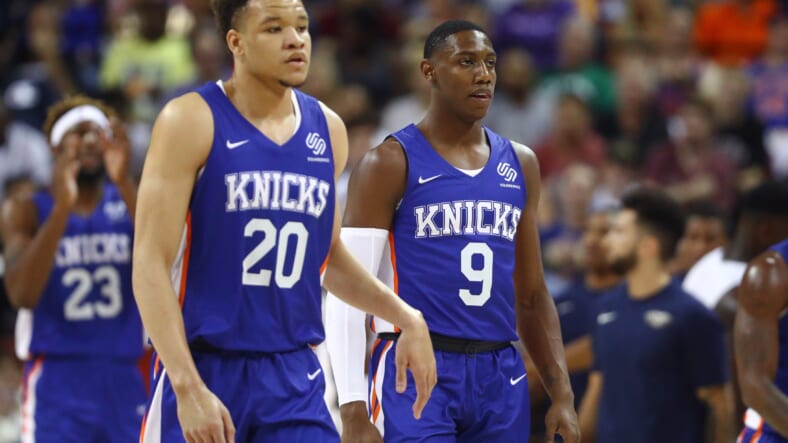 According to Jonathan Macri of Knicks Film School, the New York Knicks are a “potential trade partner” for Indiana Pacers guard Victor Oladipo, who “wants out” this offseason.

“Staying in Indiana for a moment, fresh off reports of an unsettled locker room and one Eastern Conference executive betting that the Pacers trade two-time All-Star Victor Oladipo before next season, I heard from a league source that â€œhe wants out,â€ and that there are whispers of the Knicks being a potential trade partner.”

Oladipo has spent the last three seasons with the Pacers. This season he appeared in 19 games, 16 of which were starts, due to his recovery from a 2019 leg injury; he averaged 14.5 points, 3.9 rebounds and 2.9 assists per game while shooting 39.4 percent from the field.

The Indiana product’s standout season was the 2017-18 NBA campaign; Oladipo averaged 23.1 points, 5.2 rebounds, 4.3 assists and 2.4 steals per game while shooting 37.1 percent from beyond the arc. He has been an NBA All-Star in two of the last three seasons.

Oladipo has one more season remaining on his four-year, $85 million contract, and he has been a recurring trade candidate for the upcoming offseason.

The Knicks have been linked to a bevy of high-profile guards since president Leon Rose took over as team president in February, including Oladipo, Chris Paul, Donovan Mitchell and Devin Booker.

New York could offer Indiana some combination of players who are on rookie deals including RJ Barrett, Mitchell Robinson, Kevin Knox, Frank Ntilikina and Dennis Smith Jr. They also have their own first and second-round pick (8, 38) and the Los Angeles Clippers’ first rounder (27) in October’s NBA Draft. New York has seven first-round selections over the next four drafts.