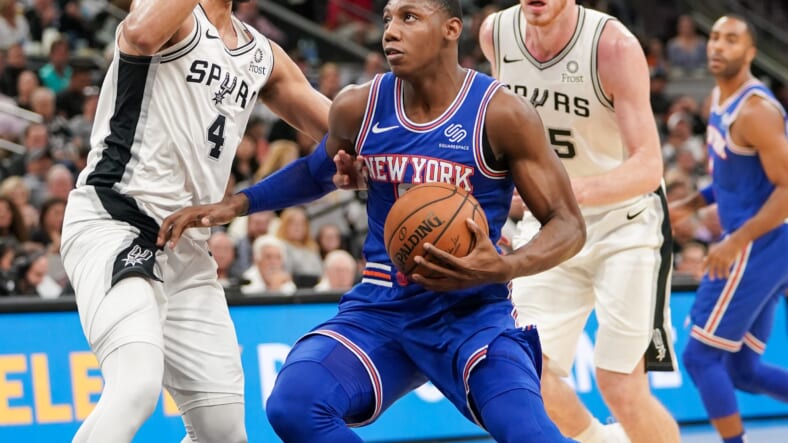 The New York Knicks are one game above .500, having won their last three games, including a dominating performance against the Detroit Pistons on Sunday evening.

They held Detroit to just 90 points, and while they are a struggling squad, it is a positive sign to see New York controlling poor teams instead of playing down to them. New York has a relatively easy schedule the last few days, but an impressive win over the Indiana Pacers gives them a bit of hope against a strong San Antonio Spurs team.

Three keys to beating the Spurs for the New York Knicks:

The Knicks need to rely on their strengths, which includes playing aggressive defense and controlling San Antonioâ€™s best players. Currently, the Spurs rank 21st in the NBA in points per game with 111.

They are shooting 45.5% from the field and 36.2% from three-point. In fact, the Knicks are a more effective three-point shooting team than San Antonio, indicating that they might have a slight advantage if that portion of their game is activated. The Knicks are quite streaky in that category, but when theyâ€™re connecting on shots, they can rack up points quickly.

Nonetheless, New York relies on their defense to get the job done and considering they have the number one unit in points per game allowed with 104, this will always be an advantageous matchup for a team that is below average in scoring. While ESPN has the Spurs favored by 66.1%, I wouldnâ€™t rule out the Knicks from performing better than anticipated.

San Antonioâ€™s best player is DeMar DeRozan, whoâ€™s currently averaging 20.3 points and 7.2 assists per game. He has the ability to take over a contest at any moment, so expect NY to mark him with Frank Ntilikina, was proven to be extremely valuable since making a return two games ago. Head coach Tom Thibodeau has already stated how amazing his defense has been, so we can expect them to utilize this matchup to stifle for San Antonioâ€™s offense.

3.) Trust their guns to get it done on offense

The Knicks need their offensive performers to step up in this contest, specifically Julius Randle and RJ Barrett. Randle is averaging 23.4 points and Barrett at 16.5 per game.

However, it has been point guard Derrick Rose that has led the charge in recent days, averaging 12.5 points per game but also 4.9 assists over 24.6 minutes. His influence on defense has been aggressive, but his court vision has been the most impressive part of his game. Heâ€™s able to find, and curate passes that others on the team simply canâ€™t create, which boosts his value on the floor.

The Knicks have been playing stellar basketball lately, scoring far more than their 105 point average over the last three games. In fact, they posted 140 against the Sacramento Kings last week. With the New York offense starting to take shape, exercising a dominant performance against San Antonio would undoubtedly put them on the map.