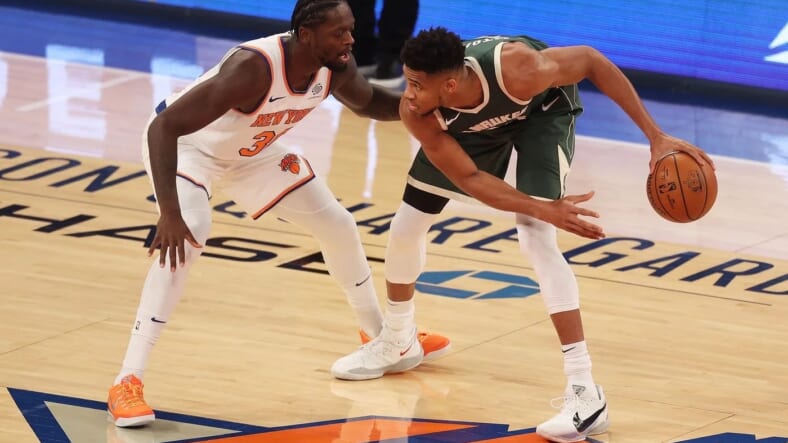 Stopping the Milwaukee Bucks is easier said than done, and the New York Knicks have a big contest ahead of them on Saturday evening at 8 PM. The Knicks, who are coming off two consecutive wins over the Washington Wizards, will travel to Milwaukee, who recently to the Boston Celtics 122-114.

The Bucks havenâ€™t scored less than 100 points since a loss to the Denver Nuggets weeks ago. Their offense is potent, led by Giannis Antetokounmpo. There is no question the Knicks have a massive task ahead of them in stopping arguably the best player in the NBA, so letâ€™s take a look at three keys they need to overcome Milwaukee.

Three keys to beating the Bucks for the New York Knicks:

1.) Limit Giannis as much as possible

Dealing with the entire Buckâ€™s team is difficult enough, but stopping Antetokounmpo is borderline impossible. The Celtics managed to limit him considerably, though, holding him to just 16 points over 27 minutes. In fact, not a single Bucks player breached the 20 point mark, showing they can be stifled defensively. Boston forced 16 turnovers and blocked eight shots, and considering the Knicks have the best defensive unit in basketball, thereâ€™s hope they can upset the Bucks.

One thing that must happen is a stellar offensive performance from All-Star Julius Randle and RJ Barrett. Both players are coming off solid performances against the Wizards, specifically RJ Barrett, who secured 24 points and 10 rebounds. However, it has really been Alec Burks that stepped up and rose to the occasion, earning 27 points against Washington, pushing them over the edge, and securing the win 106-102 despite a significant point deficit entering the second half of the game on Thursday evening.

If the Knicks want to win this game, they are going to have to score 115+ points, in my opinion, so the offense must be flowing efficiently against Milwaukee.

Milwaukee is also dominant in the paint, with Antetokounmpo using his long strides and arms. Considering heâ€™s averaging 11.5 rebounds per game, the Knicks need to be extremely productive down low, boxing him out and stopping him from corralling offensive rebounds. The Knicks will not have many second opportunities on shots that bounce off the rim, so they need to be efficient on the first go. However, Milwaukee has Brook Lopez and Bobby Portis, who are both averaging 11+ points. The Knicks will need to be efficient from beyond the arc if theyâ€™re going to win this game since they will likely be overwhelmed in the paint.