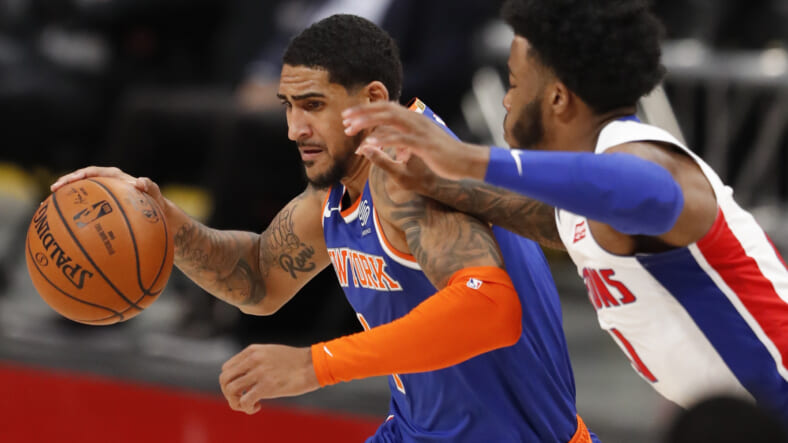 The New York Knicks are having an arbitrary season, showing a lack of consistency and then blowing up against the Boston Celtics following a five-game losing streak. At 6-8, the Knicks are just good enough to demand some respect â€” against the Celtics on Sunday afternoon, they showed what theyâ€™re capable of doing against quality teams.

They posted 105 points against Boston, who entered the game with eight wins and three losses. New Yorkâ€™s defense was phenomenal, holding their opponents to just 75 points, with the majority coming from starting shooting guard Jaylen Brown. The Knicks, however, saw contributors from the starting roster all the way to their depth from the bench.

Head coach Tom Thibodeau knew that his team was close to finding a victory, as theyâ€™ve been practicing extremely well and showing quality.

â€œI told our players this: The way theyâ€™re practicing, the attitude, the approach and how theyâ€™re practicing has been a positive,â€™â€™ Thibodeau said. â€œI thought going to Cleveland, I thought we were ready to play. I thought we were terrific in the shootaround and we played well enough to win [Friday] on the road. We didnâ€™t close out the game the way we wouldâ€™ve liked. Then [Saturday] in practice I thought was terrific. As long as weâ€™re doing the right things. I know weâ€™ll improve and weâ€™ll keep getting better.â€

Thanks to a few key performances from players like Julius Randle, Immanuel Quickley, and RJ Barrett, New York is finally in the win column again and looking to pick up another against the Magic on Monday afternoon.

Three keys for the New York Knicks to beat Orlando:

Orlandoâ€™s biggest threat is Nikola Vucevic, who leads the team with 22.8 points per game, 10.8 rebounds, and also manages to spread the ball with 3.8 assists. If the Knicks can take him out of the contest or at least limit him, it will increase their probability of winning tenfold.

Vucevic is dominant on the boards, though, a category that the Knicks need to win if they want to stay competitive. He is a monster rebounder who shoots extremely well from the paint. He should be the focal point defensively for Tom Thibodeau and his squad.

Another great thing New York did against Boston was hit on the three-pointers. They connected on 38.7%, hitting 12. Rookie power forward Obi Toppin hit two timely long balls, contributing 12 points on the day.

Fellow rookie Quickley also contributed two three-pointers, with Reggie Bullock posting three. The Knicks did a great job of getting shooters open with time to spare, and uncontested shots are exactly what they need to get more of if they want to beat quality teams like Boston. They did a good job on Sunday, and hopefully, it boils over into Monday afternoon.