Knicks “Win” in a Competitive Loss to the Cavaliers 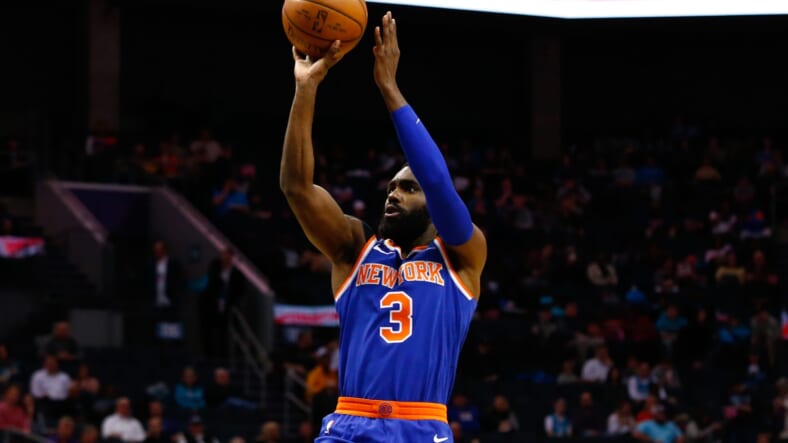 No matter how you slice it, every Knicks loss attributes to another positive win for the Knicks organization. Nobody is asking players to lose or throw the game on purpose. But with Coach Fizdale giving more playing time to the young-studs is exactly the type of progress and breathe of fresh air this organization needs. Rejoice in the losses for there is beauty at the end of this struggle Knicks fans. Just sit tight.

The New York Knicks go into Cleveland and did exactly what theyâ€™re capable of… lose to a 6 (now 7)Â win Cavaliers team, thats missingÂ Tristan Thompson and J.R. Smith, and lets be frank …Â Competing for the #1 overall pick in the 2019 NBA Draft.

The Knicks rolled out another new starting lineup, this time with rookie Kevin Knox receiving the nod. When Coach Fizdale was asked about the lineup shakeup, the coach was very blunt,Â “Why the hell not?!”Â Why the hell not indeed, sir. In case you’re still not caught up, the New York Knicks organization has 3 goals in the 2018-2019 season; to develop players and create a winning culture, shed contracts for players who won’t be re-signed and/or players who will eat up cap space next offseason, and of course– have one of the bottom three records in the NBA to almost guarantee a top 3 pick.

Call me pessimistic, but the confidence I have in the Knicks organization doesn’t quite compare to how I feel about Cashman and the Yankees in the Winter Baseball Meetings this past week in Las Vegas, where the Cash-ManÂ has already had an infamous quote claiming the Yankees are a “fully operational death star.” Of course nobody is expecting the Knicks to have a Yankee-like offseason, especially with salary cap restrictions in the NBA as compared to the MLB.

Not trading Courtney Lee’s contract would be an incompetent move that Mills and Perry would never let happen… I hope. Courtney Lee is rehabbing his neck surgery with some playing time with the New York Knicks G-League affiliate, Westchester Knicks. The veteran guard is the Knicks prime trade bait before the February deadline. Leeâ€™s on the comeback with 16 points, 7 rebounds, and 3 assists in his first live basketball action since this injury. The Knicks want to bolster his trade value which all depends on his health.

It now becomes the task of the Knicks front office to take advantage of the contracts that the team will not retain in 2019. Â This includes, but not limited to, moving around Enes Kanter, Trey Burke, Mario Hezonja, Emmanuel Mudiay, Luke Kornet, or even Tim Hardaway Jr.’s massive contract. The key to success for the Knickerbockers is to shed bad contracts and not pick up new strangle holds on the 2019 cap. Remember, with the new 2019 NBA Draft Lottery rules, the bottom three records in the NBA now have the same odds at the #1 pick in the 2019 NBA Lottery.

One Undrafted Guard for Another

Today the undrafted rookie sensation from Arizona, Allonzo Iso-Zo Trier, Â officially was relieved from his 45 day contract, signing a two year $7 million contract with a team option next season. According to ESPNâ€™s Ian Begley, this contract is the largest first-year salary for a non-international undrafted free agent.Â  This season, Zo will be making just about $300k less than Knicks 9th overall pick Kevin Knox. Additionally, Zo will be a restricted free agent in 2020 with early rights for the Knicks (which allows the Knicks cap relief when resigning the player in 2020).

To free up space for Zo, Ron Baker, a 2016 undrafted free agent from Wichita State and weirdly a New York Knicks fan favorite, has been waived. The writing was on the wall for Baker and the Knicks, but Zo became the guy the front office was hoping for.

All that being said, the Knicks came out slower than the Belt Parkway during rush hour, against the Cavaliers. They gave up 39 points in the first quarter to a young Cleveland team averaging 103 points per game this year, is unacceptable. The Knicks can not have a winning culture and also trail the six-win Cavaliers by 16 points after the 1st quarter, then go into halftime trailing 54-65, with Rodney Hood leading all scores with 13 points.

That can not be the case with the New York Knicks despite one of the youngest starting rosters in the league. Especially if they want to attract free agents to the team and most importantly, win some games when Kristaps Porzingis recovers from his injury. Yea, remember him? He’s also lurking in the shadows of the team, just waiting to pounce, without disrupting the tank.

The Knicks opened up the 3rd quarter with a 9-0 run and the game became competitive from that point on. This young teams ability to compete is not important for aesthetic purposes only, but it is very difficult for coaches and the front office to evaluate talent or progress in blowouts. Game speed and realtime decision making is impossible to replicate, and progression comes with repetition.

Enes Kanter with yet another a double-double with 20 points and 11 rebounds and Tim Hardaway Jr. had 20 points on 6 for 18 from the field, coupled with 5 rebounds. The young studs Frank (Say it with me… Ni Luh Kee Nuh) and Kevin Knox put on great performances in the box score and down the stretch. Kevin and Frank have nothing to hang their head. Knox dropped 19 points on 7 for 15 shooting, 7 rebounds, and 2 blocks, including a highlight block off the backboard, a three pointer and an arena quieting slam.Â Frank also had a great game ending with 16 points, 3 rebounds and 4 assists. He added great defense against Rodney Hood in the final minute of the game that still resulted in a basket for the Cavaliers.

Emmanuel Mudiay also had a great game in the box score adding 16 points, 8 rebounds, and 6 assists. However, two consecutive late game blunders made this a game to forget for Mudiay. The final minute of the game looked like a game of hot potato. Mudiay’s late turnover from an inbound timeout play and the game ending non foul call in the paint.

All in all the Knicks organization checked off all their boxes today. The team moved one step closer to the first round pick, played a competitive game, and young studs progressed. The Knicks are onto Charlotte, again, where the rumors of Kemba Walker to the Knicks will undoubtedly spark up.Â For me, the best part of playing the Charlotte Hornets,is laughing at the naysayers that have strong feelings about the Knicks choice of drafting the French Prince over Malik Monk and Dennis Smith Jr.