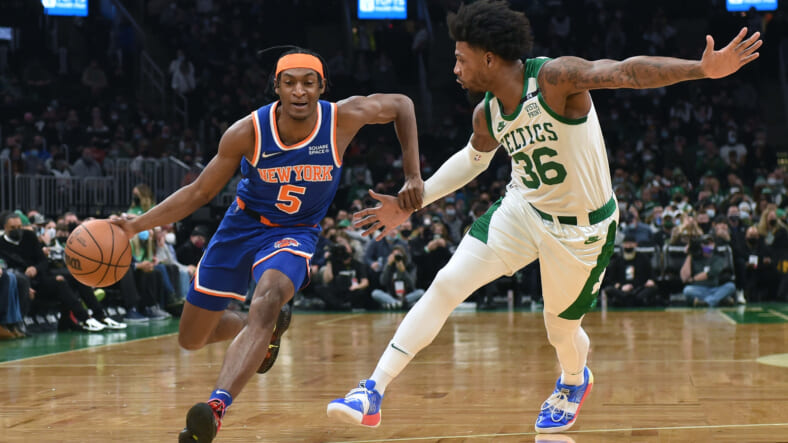 On Saturday evening, theNew York Knicks were a no-show against the Boston Celtics after a buzzer-beater win on Thursday by third-year guard RJ Barrett.

The Knicks were desperately trying to draw even on the season at. 500 with a 19–20 record heading into the contest, but they will once again be fighting for an opportunity to hit the refresh button as they look ahead to the San Antonio Spurs on Monday.

After scoring 108 points at MSG, the Knicks backed it up with a 75 point outing in Boston, as the bench contributed just six points, all of them coming from Quentin Grimes over 28 minutes. The best ways to describe Tom Thibodeau’s team in the defeat are sloppy, flat, and dismal.

The starting five led the way as Immanuel Quickley posted 18 points and Barrett contributed 19, but Boston’s defense held them to 35.5% shooting from three-point range and 40% shooting from the free-throw line, which is more an indication of carelessness than inefficiency.

Boston shot an incredible 41.4% for three-point range, hitting 12 shots. Jayson Tatum posted 19, and Jaylen Brown led both teams with 22 and 11 assists, showcasing awesome vision and scoring prowess. Whether the Knicks had off night or were simply outplayed, the energy wasn’t there, specifically from Julius Randle, who shot 1 of 8 from three-point range and posted a -17 +/-.

While Randle did contribute 12 rebounds and six assists, he had an off night from range, potentially a result of harsh criticism this week after cursing at a media member and earning a $25K fine in the process.

New York will look to forget this performance and pick things back up again, San Antonio, who have lost five of the last six games, including a 19 point defeat to the Philadelphia 76ers. They will take on the Brooklyn Nets prior to the Knicks on Sunday afternoon, so playing back-to-back games will give the Knicks an advantage at home on Monday.