Knicks welcome back Carmelo Anthony, who shows eternal love for his former team 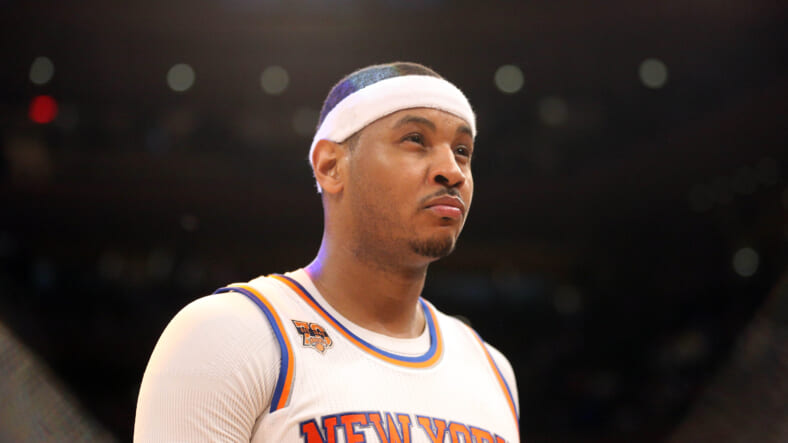 The New York Knicks are looking to snap a streak of poor play against the Los Angeles Lakers on Tuesday night, who will be without LeBron James after getting into a scuffle with Isaiah Stewart of the Detroit Pistons over the weekend. James was suspended for one game, so he will miss the anticipated matchup against the Knicks, with both holding similar records. The Lakers are .500 on the season, and the Knicks are just one game above an even record.

However, the team is looking forward to welcoming back Carmelo Anthony, who joined LA this offseason at 37-years-old. Anthony is contributing 15.2 points, 3.4 rebounds, and shooting 46% from deep over 6.4 attempts per game, the highest mark of his career. Carmelo is actually experiencing somewhat of a resurgence in the shooting category, contributing heavily to the Lakers despite their deficiencies on defense. The Lakers have only kept one team this season below 100 points, so the Knicks have a great opportunity to right their offense, especially within the starting team.

â€œI always look forward to playing at the Garden, playing in front of the fans,â€ Anthony said,Â  via the New York Post. â€œWith the Knicks or against the Knicks. That love is different. That fan base is different for me. It goes deeper than basketball. They embrace me. I embrace them.â€

Anthony spent seven seasons in New York, becoming the face of the franchise despite management’s inept to build a proper team around him. Carmelo expressed his love for the city and the unbreakable bond heâ€™s created.

â€œI donâ€™t think the bond between myself and New York City will ever go anywhere,â€ Anthony said. â€œThatâ€™s why I embrace it the way I do. Iâ€™m looking forward to [Tuesday]. The crowd â€” the Knicks are playing great basketball. They have good energy up there. We know how [Tom Thibodeau] teams are. Theyâ€™re a very tough team. We know we have to come in and put our hard hat on [Tuesday] night. It will be great to get a win at the Garden. Iâ€™ll tell you that.â€

Melo went on to offer some words of encouragement for the Knicks, indicating his appreciation for signing Kemba walker this off-season.

â€œI love the signing with Kemba,â€ Anthony said. â€œI donâ€™t know what took Leon so long to get that done. It was like perfect timing. He had an opportunity to get out of [Oklahoma City] and Leon jumped right on it and brought Kemba in. New York native, home, had a lot of success in the Garden in college. Heâ€™s from The Bronx. This is home. I know the feeling that heâ€™s playing with. I know what heâ€™s dealing with being from here and putting on the uniform. Iâ€™m glad Kemba is home.â€

Despite Walker struggling up to this point, the hope is that he will end up being a productive and electric scorer as the team continues to build chemistry and gel. Considering the Lakers’ poor defense, this would be a great opportunity to take advantage and get right before Thanksgiving.