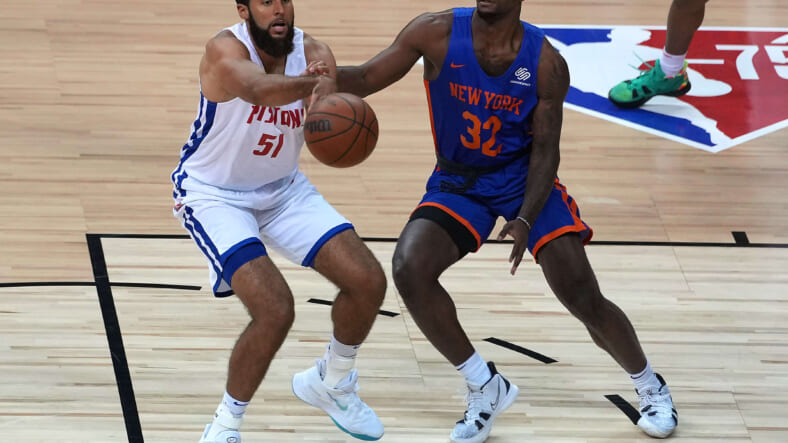 The New York Knicks executed a slew of moves on Saturday afternoon to cut the roster to 15 ahead of the regular season. With the first game coming on October 20 against the Boston Celtics, the Knicks are now in a good place with a solid group of players to hopefully elevate a team that enjoyed a successful resurgence in 2021.

The preseason for the Knicks has been extravagant, as the team earned a victory over the Washington Wizards on Friday night thanks to Julius Randle on a buzzer-beater to end the game. Down by 19 points in the third quarter, the Knicks marched their way back, propelling them into the regular season on a high note.

However, the Knicks had to make multiple moves to cut the roster down, including the waiving of Brandon Goodwin, Brandon Knight, Aamir Simms, and MJ Walker.

The Knicks signed veteran guard Brandon Knight on Saturday, quickly waving him after the 29-year-old spent last season with the Detroit Pistons, averaging 11.6 points and 4.2 assists per game over nine games. Knight, who originally was the No. 8 overall pick in the 2011 NBA draft, will be looking for a new home, but unfortunately, it wonâ€™t be with a New York team.

The Knicks also waived Goodwin, who has been the talk of the town regarding COVID-19 vaccinations after he claimed it gave him blood clots last season, putting his career in jeopardy. Goodwin didnâ€™t enjoy any action with the team before being waived on Saturday.

Simms, who has spent the summer and off-season with the Knicks, unfortunately, could not make a significant impact. The Knicks didn’t utilize Simms enough during the preseason to get an adequate sample size of his talents, but considering how deep the team is, they didn’t bat an eye choosing rookie Jericho Sims instead.

The final move the team made was waiving MJ Walker, who was a rookie out of Florida State this off-season. Last year with the Seminoles, he posted 12.2 points over 24 games. The Knicks have a ton of quality guards, so his talents simply werenâ€™t needed. It is possible he lands on the G-League team.