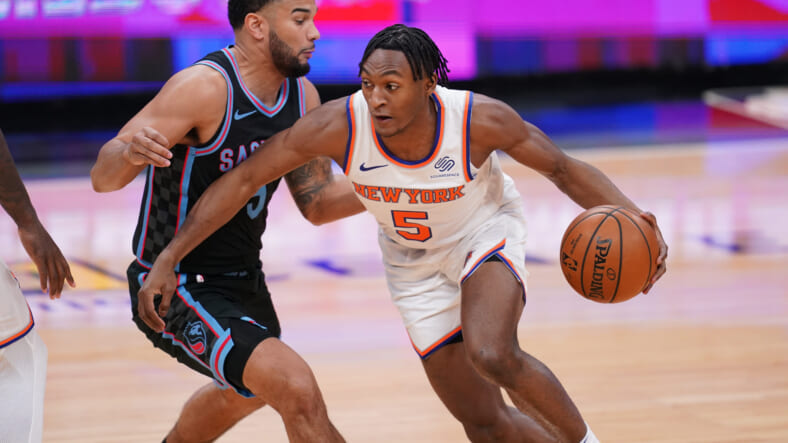 The New York Knicks have found it incredibly difficult to solidify the point guard position, and while they havenâ€™t allocated an exorbitant amount of capital toward fixing it, they do have a few serviceable players on the roster. When they originally drafted Immanuel Quickley out of Kentucky with the 25th overall pick, they viewed him as more of a shooting guard with PG potential. His former coaches had nothing but great things to say about his work ethic and potential, and Quickley has surpassed any expectations set forth in his rookie season.

The question is, is he the future at the position, or do the Knicks have to target a potential star PG this upcoming off-season or prior to the March 25 trade deadline?

Per Marc Berman of the NY Post, the Knicks might not have their point guard just yet:

According to a source who has been in contact with Knicks brass, the franchise still is unsure if the team has a surefire starting point guard.

Do the New York Knicks have their future PG?

Quickly has been a revelation for New York this season, averaging 12.2 points per game on just 18.8 minutes played. He has been a stellar shooting guard but has been asked to play the PG position as he continues to develop in that role. His primary issue is his assist numbers (2.4 per), and his vision on the court has lacked at times. He has the capabilities to run the offense and attack the rim aggressively, but he misses passes and often times tries to do too much himself.

With that being said, Quickley has incredible potential and could easily be the future at PG for the Knicks. I believe with more reps and live-action, the game will begin to slow down, and his court vision will improve. Heâ€™s still progressing through the developmental stages of entering the NBA as a late first-round pick, but he has far exceeded expectations, and I believe he has the qualities to be their future star at the position.

When management traded for Derrick Rose, nobody knew what role he would take moving forward. Rose has not only been a force as a starter, collecting 12.5 points per game and utilizing his unique passing abilities to open up the floor, but heâ€™s also been a mentor for Quickley.

Rose is in the final year of his contract, and the Knicks could look to extend him, but I donâ€™t see him as a future starter at PG, but rather a solid depth piece they can rotate in and out to provide a spark.

The Knicks signed Elfrid Payton to a one-year, $5 million deal this past off-season, and while he provides great size and defensive prowess, heâ€™s not a flashy player that can score at will and create openly. Heâ€™s averaging just 3.7 assists this season, a career-low for him. He is averaging 12.7 points, the highest itâ€™s been in three years, though.

I believe Payton was more of a stopgap until they found their future starter at point guard, and I fully expect them to either trade him within the coming days or let him walk after the 2021 season concludes.