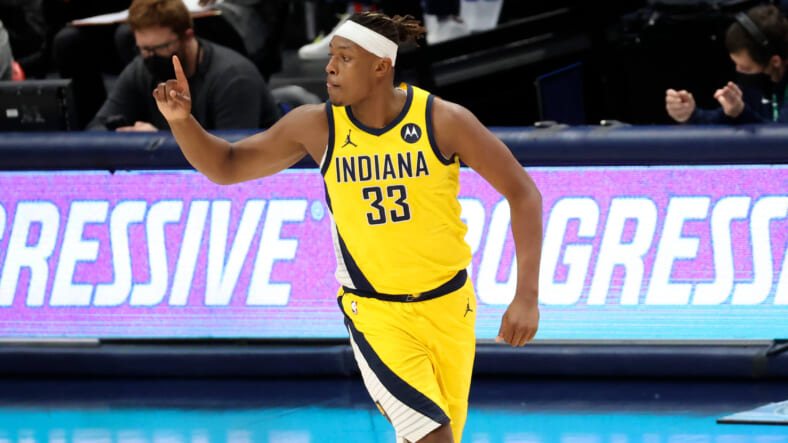 The New York Knicks are still undecided on Mitchell Robinson being their long-term center. After suffering a fractured hand and foot last season, Robinson performed in just 31 games, starting in 29. He averaged 8.3 points, 1.5 blocks, 8.1 rebounds, and shot 65% from the field. Unfortunately, this was not the campaign New York anticipated from Robinson, who was trying to reach the next level and average double-digit points per night.

Injuries have held Mitchell back, and on the final year of his rookie contract, where he will earn $1.8 million, the Knicks have a big decision coming up centered around his extension.

If the Knicks elect to extend him on a long-term deal, they will have to offer him a pay raise, but there is one other option they are heavily pursuing, according to J. Michael of the Indy Star.

The #Knicks have been trying hard to get #Pacers to part with Myles Turner. So far, not happening. This and other intel entering free agency. They don’t seem in a hurry to bust up their core. https://t.co/EbXdFIHDO9

President Leon Rose could be looking to incorporate Robinson in a potential trade offer for Indiana Pacers big man Miles Turner. Turner is on a four-year, $80 million deal with two years left on the contract. He will earn $17.8 million in each of the next two seasons, but at this point in his career, heâ€™s not only a more refined talent compared to Robinson, but heâ€™s also a better scorer.

Last season, Turner averaged 12.6 points, 6.5 rebounds, and shot 47% from the field. He started 47 games for Indiana, posting a career-high 3.4 blocks. Robinson is known as one of the best shot blockers in the NBA, and his career-high was only 2.4 during his rookie campaign in 2018.

While Turner is earning a significant amount more than Robinson this upcoming year, heâ€™s only 24-years-old and offers just as much if not more defensively, and heâ€™s capable of shooting from downtown, averaging 33% over 4.4 attempts last season. He is a 78% free-throw shooter compared to Robinson at 57%.

For Tom Thibodeau, Turner would be a significant addition, but unless they envision Robinson as the future and donâ€™t want to give up on his potential, they could continue to pester Indiana until they consider a trade offer. With free agency opening up on Monday evening, things will likely move quickly.

By trading for Turner, the Knicks would have to include Robinson in the deal, which could be worth it based on their statistical comparisons.

Would you include Robinson in a trade for Myles Turner? Comment below!