Knicks’ Tom Thibodeau raves about Zach LaVine, could trade be a possibility? 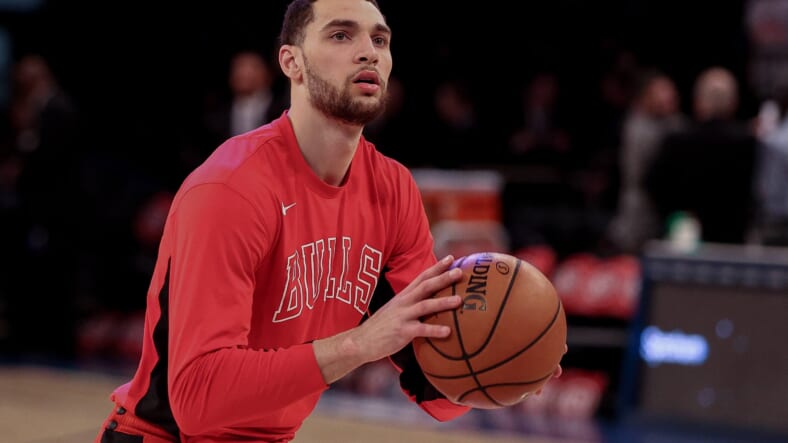 The New York Knicks fell to the Chicago Bulls on Monday evening, making it their second consecutive loss after submitting to the Los Angeles Clippers over the weekend. In the contest, second-year guard RJ Barrett finished with 14 points, his lowest over the past few days, as Julius Randle recorded a team by 23 and 11 rebounds. Rookie Immanuel Quickley logged 16 points over 30 minutes, providing that jolt offense they needed in the fourth quarter. However, it simply wasnâ€™t enough, as the Knicks’ defense failed to rise to the occasion, as they seem gassed/exhausted in the final moments.

However, head coach Tom Thibodeau got a glance at one of his former players, Zach LaVine, who finished with 21 points and shot 50% from the field. He also hauled in five rebounds and recorded three assists. He was dominant in the contest, connecting on multiple three-pointers that sealed the win and sent the Knicks packing.

Thibodeau raved about LaVine after the contest and once again fuels a dim flame that the Knicks could target him as a trade option.

â€œHeâ€™s continued to grow I think each year,â€™â€™ Thibodeau said. â€œI think sometimes we tend to forget the steps that players take to get to the point to where they are today. and for Zach, he started off, I think he scored around 13 or 14 points a game his first year. Then there was another four-point jump. Now heâ€™s up to 26, 27. Heâ€™s shooting 50, 40, 90. Heâ€™s an elite shooter. Heâ€™s a great athlete. â€¦ But heâ€™s a great guy, a hard worker. So you knew he would continue to improve. Heâ€™s playing at a very high level.â€™â€™

The New York Knicks should at least give Chicago a call:

While the Knicks donâ€™t necessarily need another big man, LaVine is more of a shooting guard that can slice and dice to the basket and has also seen an improvement in his defensive abilities. His growth over the past few seasons is noticeable, going from an average of 16.7 points in 2017-18 to 26.6 this season over 19 games. Heâ€™s also seen a career-high assist average this year with 5.1 and another personal record of 4.8 defensive rebounds. Some might say heâ€™s a mirage in terms of trade value, but the Knicks desperately need a 6-foot-5 shooter and natural scorer.

It is unlikely the Bulls will even consider trading him away, but if theyâ€™re willing to talk, the Knicks should engage and value him highly.