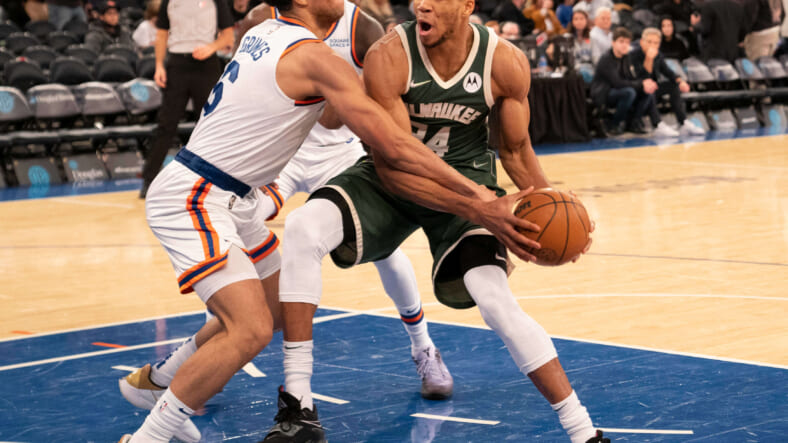 The New York Knicks might have something special with rookie Quentin Grimes out of Houston. The shooting guard stands at 6-foot-4, 210 pounds, but showcases incredible energy as his most valuable attribute early in his career.

Despite the Knicks struggling through a cold streak, they secured an impressive victory over the Atlanta Hawks on Saturday, Christmas Day. They are gearing up to take on the Minnesota Timberwolves on Tuesday night at 8 PM, a winnable game considering they will be without D’Angelo Russell and Patrick Beverley.

However, the Knicks are still going through lineup changes with players returning from the NBA health and safety protocols list.

After the game, the Knicks’ coach raved about Grimes’s qualities, specifically hitting on his defensive contributions.

“The energy and defense, that’s a big component,” Thibs said. “He is a terrific wing defender for a young guy.”

The best way to get into Thibodeau’s good graces is to play aggressive defense and provide unparalleled energy. Grimes runs up and down the floor without missing a beat, utilizing those young legs to provide his team with a spark.

Another efficient development regarding Grimes is his shot selection. The Houston product is hitting an impressive 45.5% of his three-point attempts, including 42.3% from the field. He hasn’t been a shot creator, but simply getting in the right positions to knock down good opportunities. He’s hit 95.5% of his field goals off assists. Every single three-point field goal made this season has been assisted, which is something the Knicks need with several players taking on the role of creators.
Thibs didn’t only mention Grimes but also fellow rookie Miles McBride, who has also just flashed signs of potential this season.

“The intensity that he plays with, he is all out and so is Miles McBride and that is a different weapon that we have,” Thibodeau said. “Both of those guys have been terrific. You can add Jericho [Sims] to that. I love our young guys. They are great workers, they are competitive, they are smart and those types of guys always get better.”

The rookies and youngsters have been an essential factor in keeping the Knicks alive and in games this season, despite falling below .500. Their schedule is lightening up a bit after a tough stretch the past few weeks. They will take on Minnesota, Detroit, Oklahoma City, Toronto, Indiana, and back-to-back games against Boston. All of these teams are sub .500 squads, giving the Knicks a bit of hope to string together a good stretch of wins and get back into playoff contention.