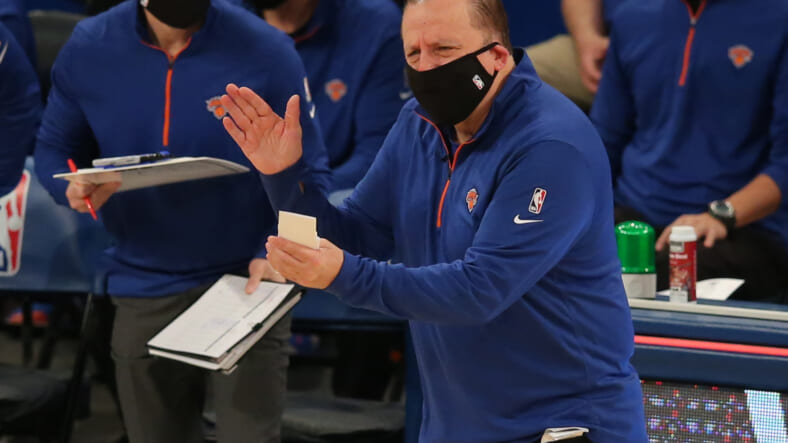 The New York Knicks emerged victorious over the Dallas Mavericks on Friday evening by a score of 117-109. In a gritty and resilient performance, the Knicks once again established their impressive defense but also showed off their offensive prowess.

In the win, star Julius Randle posted 44 points and 10 rebounds, while second-year guard RJ Barrett recorded 24 and eight rebounds. Barrettâ€™s development this season has been astronomical, and he is seeming to be the perfect pairing with Randle as they continue to grow chemistry. However, the Knicks could use a few more essential pieces next season — head coach Tom Thibodeau believes most of their success is based on mentality and practicing hard.

The veteran coach might not be happy, but he is content with the way his team is playing and realizes how much more basketball is left this season.

“Am I happy? You know I’m never happy,” Thibodeau said postgame, according toÂ ESPN’s Tim MacMahon. “We try not to get wrapped up in all of that stuff. I think you don’t want to get lost, and that’s the most important thing to understand what goes into winning. I think if we’re taking care of all the little things, the big things take care of themselves.

The Knicks are pieced together by one-year supplements, including Taj Gibson, Derrick Rose, Nerlens Noel, and Elfrid Payton. In fact, most of the roster is in the final years of their deal or signed a one-year contract for the 2020â€“21 season.
Sometimes, it is simply the mentality that sparks success and victory, and the Knicks are winning with confidence and playing extremely aggressive defense.

“I think we have a belief that we can win, and that’s probably the most important thing. It started that way in the beginning. It doesn’t really matter what outside people think. It’s what we think.”

After seeing the success the team has enjoyed this season unexpectedly, Thibodeauâ€™s words ring true. Outside factors have seemingly crept their way into the organization, affecting play and performance, but this year things are different, closed-off and cautioned by the outside world. The Knicks are playing team basketball, showing immense heart and fight with their top-ranked defense. During this five-game win streak, the Knicks have closed out games they wouldâ€™ve lost a few weeks ago, completely dominated Dallas throughout the contest thanks to their esteemed leaders.

It’s clear things are different, and it’s just a matter of remaining consistent and bouncing back from the losses, which they’ve proved they can accomplish.