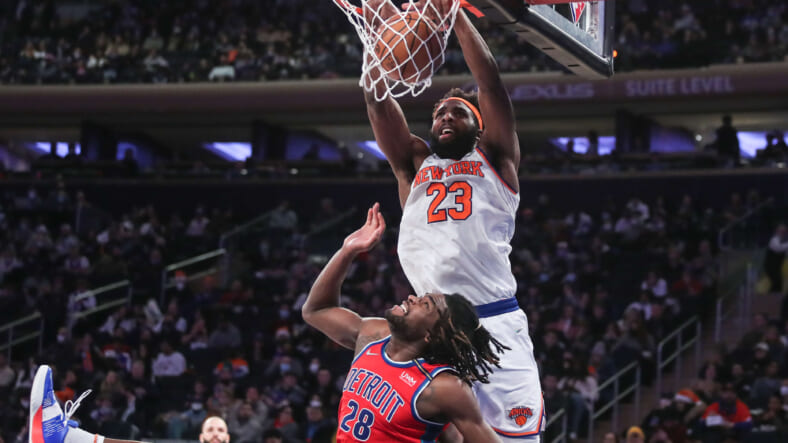 When the New York Knicks needed a victory to spark a hopeful turnaround after losing eight of their last 10 games, big man Mitchell Robinson enjoyed his best game of the season.

With players dropping like flies as a result of Covid protocols, the Knicks didn’t have many reserve pieces to call upon off the bench. Robinson, who started as a reserve, ended up playing 25 points, more than Nerlens Noel, who started the game.

Robinson offered electrifying play, dominating a smaller Detroit Pistons team, who finished with just 91 points on the evening. Not only did Robinson score 17 points, but he also totaled 14 rebounds, including six offensive. He also collected three blocks and posted a +24 +/-. His defensive production matched his offensive efficiency, which is something the Knicks have been waiting patiently for after high expectations were set during the pre-season.

After the game, head coach Tom Thibodeau had inspiring words for Robinson, coining Tuesdays win the best game of the season.

“Kemba making plays…you can’t say enough about what Mitch did, that’s his best game right there, it’s a monster game…we needed all of it.”

Robinson has struggled at times this season, being relegated to the bench in favor of Noel. With his stamina struggling after adding muscle mass this past off-season, it seems as if he’s finally hitting his stride and playing with energy.

“I felt the same way, I felt I was in better shape too,” Robinson said after the game.

Hopefully, the return of Derrick Rose and several youngsters, including Immanuel Quickley, will provide Robinson with even better service around the hoop. He has one other game this season with 17 points, coming against the Houston Rockets on December 16. During that win, Miles McBride and Quickley combined for 13 assists, as Robinson capitalized on their facilitation.

Mitch is currently in the final year of his rookie deal and a potential trade piece at the deadline this season, but if he continues to elevate his play and show more energy on the floor, he might force the Knicks to keep him around a bit longer. Alternatively, it may elevate his stock for another team looking to add a physical interior defender with awesome athleticism.